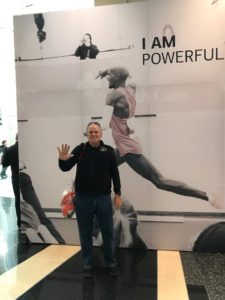 It’s been a long time since I wanted to write anything on this blog site. I’ve done some running since July 29 (last post), but nothing of any significance whatsoever.

I write today while basking in the comfort of the once lovely Best Western North River, awaiting tomorrow morning’s Chicago Marathon. I was supposed to run Chicago last year, but my knee caused me to defer until this one. This knee thing has eliminated two New York Marathons, a San Francisco, that previous Chicago, and untold numbers of local races.

Anyway, for once, I decided to get my moneys worth and at least show up at one of these expensive events. So here I am (of course it helps that I am also working Monday teaching my brand new Listing class at the NAR building). And while the day began incredibly, it has gone more downhill than the Revel course in Colorado (you’ll have to look that one up, sorry).

I awoke to the news of Eliud Kipchoge’s fabulous sub-two hour marathon run. While showering, I downloaded the race so I could watch it on the plane. One word: AMAZING! It lifted my soul immensely, and caused me to think that maybe, just maybe, this trip to Chicago would be a good thing.

Upon arriving, the Expo was crowded and fantastic. I love the buzz of a big city marathon expo. All those people, feeling fired up, conserving energy, loving the runner atmosphere that few other events possess. Arriving on Saturday, much of the best stuff is missed. Few, if any, elites are doing appearances and many booths have been picked over. Nonetheless, the electricity remained. And the new Nike hot pink shoes are everywhere.

After Ubering most of the day, I decided to take the Nike double decker bus back to 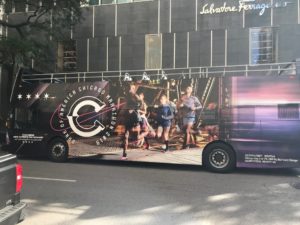 the Nike store and walk to the hotel (just four blocks). Other than the absolutely freezing wind of the Windy City, the ride was pleasant. The Nike store was PACKED.

It was walking around the store and the subsequent walk to the hotel that it hit me. I am a sad imposter.

I have run three times in the last two weeks. My five mile run from 13 days ago had my knee buckling at least ten times. My hope, from two months ago, to at least run half this thing has been replaced with a fear that I can’t even cover the 5.

My knee is shot. My doctors appointment six weeks ago emphasized this point as the only real solution he had was/is knee replacement. 114,000 miles has brought a bunch of arthritis, and zero meniscus. My knee has called it quits. On the follow-up appointment, this 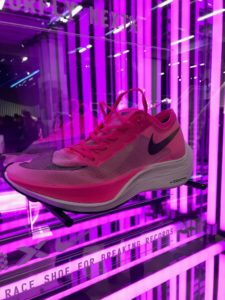 Tuesday, I imagine I will be referred over to the official knee replacer doc. It’s sad; I’m sad.

The issue is that the expo reminded me of how cool it is to be ready and focused the day before a marathon. The reality brought with it the sadness that it is just a reminder of how it was. Yeah, there are many stories of runners who beat the odds and ran far and even raced after their surgery. I’m just not sure I believe I have the discipline and/or desire to be one of them. Seems like a lot of work and after over two years of this bad knee stuff, I’m tired.