Nothing to See Here, Move Along (Caution: Whiner alert!) 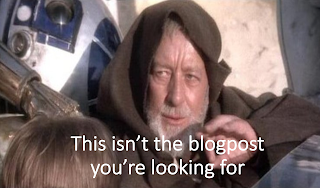 This isn’t the blogpost you’re looking for. Obi-Wan Kenobi tried to tell you that. Well, since you’re far too powerful to be Jedi mind tricked and you’re not moving along, let’s get on with this post.

As I am already immersed in my running for 2019, I look back upon the previous year understanding that it was not the best running year I’ve had. It was not the worst either, it just seemed like it.
It began innocently enough with a five mile run on New Years Day. I wrote, “Not too bad – knee stiff and sore but loosened some.” The next day, “Advil and Rock Tape helped knee a little.”  Knee, knee, knee….. if I had a hundred dollars for every time I wrote the word in my logbook….. well, I’d have a lot of Benjamins.
It wasn’t all bad. The first half of the year it actually seemed like I might approach 2500 miles for the year and get comfortable with this questionable joint whose name I will no longer type. I had runs of 13, 14, and three 16s just in March alone. I put together three weeks over 60 miles. Not bad for an old guy.
April was highlighted by a two week work sting in Idaho where I ran consistently well with good overall mileage. It all culminated with the Eugene Half Marathon (was originally running the full marathon) where I ran without significant pain or discomfort and did okay. May went pretty much the same and the annual Bolder Boulder 10K was decent. June began with the Dexter to Ann Arbor Half, a race that was originally fifteen miles (I know this because I ran that first one in 1974 – placed 14th, by the way). A terrible rainy, chilly day where everything felt lousy. The half year ended with 1250 miles, I hadn’t missed a single day of running and I had the thought that I might be able to crank it up and get in 2700.
July went well until the San Francisco Half Marathon (which was also supposed to be a full marathon). I felt pretty darned good through 10 miles and then on a downhill heard/felt two pops in my knee (oops, I used that word, sorry). I jogged in. That moment of hyperextension on a downhill changed the year. The day after: July 30, I took a day off
For the next five months I would spend the time dodging the hyperextension. My mileage dropped, my pace slowed. The “normal” feeling was one of pain (felt like bone on bone) along with a sense that any moment that thing that connects my shin to my thigh might buckle. Sucked. Many log posts in August were reduced to how many “pops” occurred on a run. I repeat: it sucked. (By the way, I withdrew from the Chicago and Cal International Marathons in addition to those previously mentioned).
On November 8, I awoke with the Mother of all colds and decided to take the day off. That day became ten days. Why not? There was certainly no reason to run through a cold (the old me would have never believed I’d have that attitude, but I did).There would be three more days off bringing the total to 17. So, I ran 348 days last year. Most people would find that to be a good thing. I just stare at the seventeen 0s (glass WAY half empty on that one).
Long story short, I ran 2148 miles in 2018. The early ones went fairly well, the later ones not so much. It brought the grand total to 113,198.
After clicking “publish” in a few moments, I will head out the door. That THING will feel as its felt the last half year or so, lousy. Something’s gotta change. We’ll see what it is.
Run on.

1 thought on “Nothing to See Here, Move Along (Caution: Whiner alert!)”