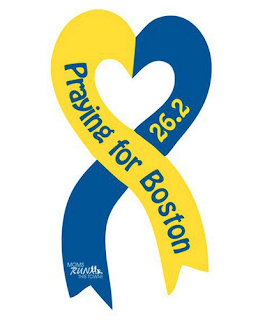 As I watched Shalane Flanagan be dropped from the lead pack in today’s Boston Marathon, I was sad. Knowing what someone as mediocre as I do to prepare for the 26.2 miles from Hopkinton to Boston, Shalane must have done so much more. Elite runners give their hearts, souls and bodies for those two times a year when they can hit the marathon starting line. I felt badly for her, and badly for myself as a fan.

Little did know that three hours later I would be glued to the Frontier Airlines television watching the details unfold concerning the horror of this year’s Boston. It left me speechless, shocked and angry. How could someone do something like this……at a marathon? And especially Boston!

I ran the Boston Marathon in 2001. Actually had a TERRIBLE day (qualified at 3:10) and ran 4:08 and change (oddly enough a minute before the first explosion). Boston was the first race I ever heard about as a youngster, my first real running dream and the holy grail of marathoning. To me, and many like me, the Boston Marathon is bigger than any annual so called Super football game, larger than the World Series and way ahead of anything the NBA or NHL does. The Boston Marathon is….. well, the Boston Marathon. It has been around for more than a century and is on the goal list for nearly every serious distance runner.

We don’t know who is responsible for this act of terror. It may be quite awhile before we do. But know this, whomever you are, messing with runners is messing with the wrong group. Runners, and those who love and support them, are a unique breed. Overcoming obstacles, for most, is a daily occurrence. You don’t mess with the toughest people around and you won’t discourage them for more than a few minutes. Runners will bounce back, as will the people of Boston and most certainly their marathon too.

So consider yourself on notice terrorist, your act only brings this already united group closer together. Runners share a common bond that goes beyond most sports, a bond of commitment, dedication and participation. You can’t beat that with just a bomb or two.

Heartfelt thoughts, prayers and condolences to all of the innocent people affected by this senseless act. It’s a sad day on the planet.