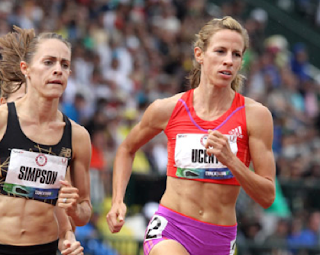 Another edition of one of my favorite events, the Olympic Track and Field Trials has come to an end. The final day had some ups and downs, the biggest down being Bershawn Jackson’s fourth place finish in the 400 m hurdles. That’s got to be the worst spot in the world, especially when your living depends on how you place in the big one. There are no big purses or jackpots for anyone but the top echelon of runners. The 15th place golfer in the AT&T National made $113,000+ today. And that was just THIS weekend’s tournament. No such windfalls in Track and Field.
The feature races, for me, the 1500 meters both went sort of as expected. Morgan Uceny, Shannon Rowbury and Jenny Simpson will represent the women and Leo Manzano, Matt Centrowitz and Andrew Wheatley, the men. In both cases, I’m not sure that anyone better could have made it. At this time, this is our best. The women, especially, could do quite well in London.
Of course, the Trials aren’t actually over as Allyson Felix and Jeneba Tarmoh will faceoff tomorrow in the Great Runoff of 2012 for the third and final slot in the Women’s 100 meter dash. After her dominance in the 200, I had half expected Felix to give the position to her teammate. Then again, as previously stated, this is what these people do for a LIVING.
All in all, the Trials were great and covered fairly well by NBC. I’m hoping for a much greater depth of coverage in London, especially in the distance races (although this was NBC’s best job to date). Nothing, of course, compares to the good old days of 1988, when I had a monster 10 foot satellite dish and could get free feeds from eight different countries PLUS the US coverage had packages where you could just watch what you wanted. All Track and Field, all the time! Five weeks till Olympic Track….. bring it on!

On a personal note, I lived through a very hot 18 miler today. Ending temp was 94 degrees. I went through 110 ounces of H2O. Unbelievably, I actually felt pretty good. Got to the halfway point of the year yesterday at 1330 miles. It’s been a good 2012!