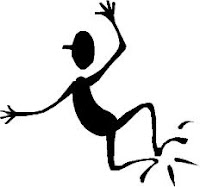 Several issues grew out of today’s 20 mile run.
First and foremost, it’s over and I am pretty happy about that. Five minutes faster than last week with the same heart rate average. It was also the culmination of a 72 mile week. With my last three weeks being 62, 67, and 72, the coming 40-45 mile recovery week is being looked at longingly. After the recovery week, three more weeks of build up, then two weeks coming down to the Napa Valley Marathon on March 6.
Today’s route was a bit different as I found a way to eliminate a bit of tacked on out and back I used last week. This time, I simply looped the Cherry Creek State Park before hitting the path for the trip downtown. This loop added two killer hills, one that came in mile two and the worst which came in mile six. Once past those, it was all downhill (so to speak). Nonetheless, the second 20 is in the books. Will probably get in another 2 or 3 in the next six weeks. The weatherman had predicted a tailwind. The weatherman was wrong (the upside was that the gale force winds of yesterday had significantly diminished). 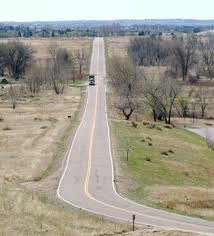 Second issue: GU. The Napa Valley Marathon uses Gu as their energy gel. I am a devout user of Power Gel. In the interest of a better marathon experience, I have elected to give Gu a Go six weeks before race day. Today’s run was Day One of the Great Gu Experiment. Attempting to be smart and efficient, I chose Strawberry/Banana as my flavor of choice. That’s my PG flavor so I figured it’d be wise to use a similar taste in the new Gu. Originally, I was going to bring three but opted for two (I didn’t want to overGu it).
Power Gel is a gel. You tear off the little opener section, squeeze that baby and it slides right down the throat. Wash it down with some H2O and you’re good to go. Gu, however, not quite as easy. Giveaway number one that this would not be the same kind of experience as my PG was the fact that while in my running belt, the Gu never changed shape. It remained just as it was when purchased despite being scrunched in the belt pocket. It held shape very much like a solid. 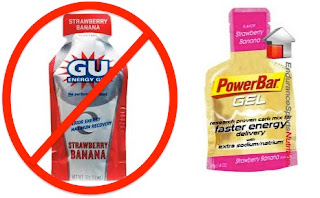 14 miles was my Gu Point. I reached in, pulled it from the safety of the water belt, tore off the top and gave it a squeeze…. Yuck! As it hit my tongue it was like I had dropped a piece of the transparent goopey stuff that they use to attach credit cards to paper when mailing. It just sat there. I thought I was going to have to bite it to get it to go down. And…. Strawberry/Banana? I think not. I tasted neither Strawberry OR Banana. I’ll give it another chance but without significant improvement (translation: without me finding a way to tolerate it), I’ll be carrying my own Gel.
Next issue: Macho Man. As cranky as I was about the Gu experience as well as the headwind, around 14 1/2 miles in I came upon a fellow running along the trail. I will call him Macho Man or MM!
MM was clad in cotton sweat pants, a wool stocking cap and a simple sweatshirt.  He looked to be in his late thirties. I’d been pulling him in for about a mile and a half. As I approached he gave a glance over his shoulder and upon reaching him, he sped up, cut right in front of me and dished out a ten meter surge that would have given pride to any world class Kenyan. I chuckled to myself. Within a short time (another 30 meters) I was next to MM again only to receive the same punishing increase in pace. “You’ve got to be kidding me,” I said, I think out loud this time. 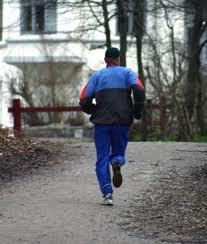 In 44 and a half years of competing, I’ve had this happen thousands of times in a race, but rarely….RARELY, if ever, on the Cherry Creek Path. At this point I remembered the words of the late, great, Steve Prefontaine who said, “someone may beat me, but they’re going to have to bleed to do it.” So this time as I approached I tossed in my own little up in the pace. As I shouldered him (my shoulder in front of his), I accelerated again and opened up a small gap. I could hear him breathing harder, so I did it again and again and then never saw Macho Man again. By the way, that ended up being my fastest mile. Mess with me at your own peril, Macho Man!
Finally, the pain of the shoe to ankle kick. A few weeks ago, I did my first track workout in AGES. One of the byproducts of my absence at the oval was a tendency to kick myself in the ankle bone with the heel of my opposite leg. I did this enough times to leave a mark (and a bruised ankle bone). Lately I’ve been fortunate enough to resist the pull of a repeat experience more than once or maybe twice per run. Today…. forget about it. I must have crashed my left shoe into my poor, defenseless right ankle a hundred times (okay, maybe ten). Each time, I have to tell you, IT HURT! Oddly, I did this more early in the run than later (I’d have expected to be clumsier in the last five miles). My victimized ankle is shown below (cleaned off the blood to keep the picture rated G). 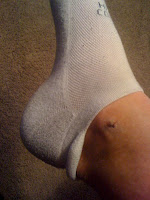 All in all, it was a decent run. I remained comfortable and relaxed throughout and that was the main goal. I’m looking forward to a recovery week in the 40-45 mile range and then back at it for another three week building block.