Grateful Running in the Pandemic. 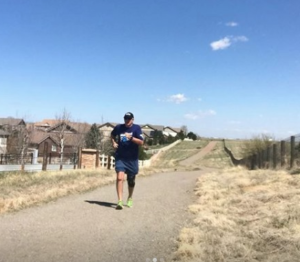 It’s interesting the subtle change. It’s not just today or last week, because it can also happen in that race when, for awhile, you’ve been reduced to a walk. You’re going along and you think, “well this isn’t so bad,” OR you’re thinking, “Man, walking sucks.” Then all of a sudden, the walk becomes a jog, a run, a jaunt….. then in that next moment, it’s completely different and you know it.

In the weeks when my “someday to be replaced knee” reduced me to only walking, I had decided that it was okay. Walking was exercise, right? I could burn calories, cover some ground, get some exercise and take care of this movement fix I’ve had since childhood. That would all be just fine. Then…… one day I had the urge. I broke into a jog and everything changed, everything.

I can’t really describe it. And there are plenty of people who feel the same way about walking, or riding, or maybe even skipping. But I don’t. To me, I can’t find the walk rhythm, no flow, over stride, not sure what to do with my hands and arms. Running, it’s different. It feels different. It sounds different, and even when done as slowly as I am presently doing it, it LOOKS different. And at this time, after all these years and all these miles, it’s like home. The run makes the exercise okay.

In fact, the run makes the world okay.

So on this May 1st, 2020, I am GRATEFUL that somehow I have brought myself out of the walk world and am back where I belong…. in the run world. It’s improved my attitude, it’s made me easier to get along with, it’s given me a more positive outlook (which is hard to do because I’m pretty positive), it’s made this pandemic easier, and it’s, frankly, just made me feel like me.

The day I ran my 100,000 mile I wrote, “Running was/is a simple activity, cyclical in its nature. One foot placed in front of the next in order to move forward: to cover ground, to open my mind, to allow me opportunities to escape my troubles or celebrate my triumphs. Mostly, to connect me to and strengthen my relationship with this planet upon which I exist. For that, I am ecstatically, humbly grateful.”

I’ve read the social media posts of the elite and “serious” runners who seem to be uncomfortable just running during this time of doubt. They lament over missed opportunities, races cancelled, medals lost. I get that, I really do. If I were elite and saw the Olympics being moved from my grasp and placed in this unknown spot, I wouldn’t like it either. In some cases, significant income is being lost, and I wouldn’t like it either. Not just elites, too. If I were faster, well trained and was missing the chance to run Boston, Chicago, London, Berlin, New York, I wouldn’t like this a bit. My memory is good enough to remember THAT kind of serious and I wouldn’t have liked it at all.

But maybe, just maybe, if that stuff is all our wagon is hitched to, well, we’ve grabbed the wrong wagon. At least that’s how I see it. And maybe, just maybe, that comes from the years of having to find the bigger reasons to engage in this activity because being fast went by the wayside years ago. HA, maybe it’s jealousy. Couldn’t tell you for sure. And in the end, I guess I can only do me.

But in the end, I’m really thankful I found this incredible activity so many years ago. And I, like all of you, have no idea what tomorrow brings. Whatever it brings, I’d like to greet it running; fast, slow, real slow……… I don’t care.

I’ll greet it whatever way I can.