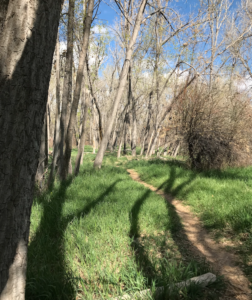 Yesterday morning I began the first sentences of an update. Upon review, it was merely going to be a whinefest about my knee. It has not been a good knee week. So, upon even further review, I’m glad I didn’t finish and publish it.

The week hasn’t been that bad I suppose. Come sunset, I will have logged about 47 miles or so (not totally sure because it’s only sunrise and who knows what the day holds). I will have also committed to my transformation for a day over a week. So a bad knee, while no fun, can be counter-balanced by some good.

So, back to yesterday. I hit the bed Friday night with legs that were just plain dead. I mean, finished-a-marathon dead and I had only gotten in 10 miles. I knew my resting heart rate the next morning would be sky high and my planned easy day was going to be miserable.

I guess my first discovery wasn’t actually a discovery, rather a reaffirmation, or re-discovery. The Merriam-Webster dictionary says that a discovery is, “an act of finding out or learning of for the first time.” So, by definition this one maybe won’t count as this particular discovery has been discovered before. AND……, I should add here that dictionary.com says that discovery is, “the act or instance of discovering.”  REALLY?  That’s as good as they could do, defining a word by nearly using the exact same word? Lame. I digress.

As mentioned a few posts ago, I track my resting heart rate. The target for a while has been sub-50. Unfortunately, once hit, I jumped back to 51, 52, and was totally ready for a 56 given the state upon which I called it a night. But there it was…… 47. The first step in re-discovery/discovery #1: our bodies are amazing recovery machines. I did my yoga and felt great and felt equally fantastic for my entire five miles. Sore knee? Not me.

Discovery #2 was, perhaps only moderately ground breaking. I have run in the Cherry Creek State Park thousands of times since moving to this area in 2004, or maybe it was 2003. I know this place like the back of my hand. Yet, yesterday, I discovered a new trail. Not like, new-new. I’d seen it existed before I had just never actually ran it. It was fabulous. 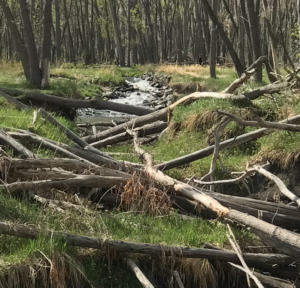 It’s a wonderful time right now in the CCSP. Spring has things blooming all over the place and a little snow melt in the hills is filling the streams and turning them into wonderfully noisy things, like little kids when they’re playing and having a blast.

I was pretty sure that this “new” trail wasn’t going to be long and I had a good idea where it emerged. Nonetheless, I was surprised how just getting off the main trail a little brought about so much silence, so much peace. I like that. Some nicely placed log jumps, a small meadow, and it eventually paralleling the creek, made it WAY fun.

Discovery #3 came about as a complete surprise and a result of Discovery #2. I was about 150 yards from my newfound trail intersecting the main drag when I had to maneuver a thigh-high log obstacle. I stepped over, looked ahead, then looked back and thought, “this would be a good place for an outdoor meditation.” SO…. long story short, that’s what I did. It was completely and amazingly different.

I’ve seen those people along the trail meditating on the rock, the tree, the ground. They always looked artificial to me, like they wanted to be seen meditating out in the wilderness. But, oh well, no judgment here. Just do it. Who cares who sees (now I know that’s how those “artificial meditators thought about it too – maybe Discovery #4?)?

Normally I do my meditation practice in my office. It’s isolated from the rest of the house and as such much quieter. When Andy (Puddicombe, founder of Headspace), says to be aware of the noises around me, 99% of the time there is nothing there. But out in the wild: birds, the creek, the occasional airplane, the leaves in the breeze. So what was I supposed to do? Should I have deserted my breath and zoomed in on the babbling brook seeking a connection with each drop of water making its way downstream? Was I supposed to block it all out, but in my mind ruining my whole great idea to meditate in this beautiful setting?

So, I did both. It was great. Don’t know if it was right or wrong, I only know ta it was perfect for me right at that moment. That is what meditation is about, the moment.

The rest of the run was just me, my thoughts, my at-least-for-the-day good knee. Nice.