A Trip to Italy (and maybe some runs) Part 8, Firenze and Kevin’s Bag and Fish

Today (Thursday) had three events on tap: a good run in town, a day trip to Firenze (Florence), and the second catered meal.

The run was simple. I took the shortcut into town, spent most of the time running the flat streets of Camigliano, and came back via the long uphill road part. That road gets amazingly narrow at times and seems safer to run than it does to drive. Still, the way the locals drive, it’s smart to be on high alert.

For Florence, Linda, John, Patty, Kyle, Kaycee, Rachel, Joey, and I would drive to Lucca, take the train to Florence and set out for some adventuring. I suppose trains are commonplace in Europe, but we just don’t see them all that much in the States. Light Rail, in Denver, is kind of the exception to that rule, but I’m just not sure how much it has caught on even after more than a decade from its opening. Anyway, it just seemed like we were cool, efficient, travelers.

“The heat, my God, the heat,” says Elaine in Seinfeld. If Lucca was hot, and Siena was hot, Florence set the new standard for hot. It had to have gotten up very close to 100. Unlike Siena, however, I felt rested and ready to go. Once again, we were on the Flexi-plan as far as what we would see and exactly where we would go. While mostly okay with that, in retrospect I would have studied a map and created some kind of constructive plan for the sights I wanted to see. Instead I had a plethora of pictures of these awesome places and I wasn’t sure what most of them were.

There were some great spots visited despite our fake it till you make it philosophy. A central meeting point for the day was around the Piazza del Signoria a very cool area that contained some great shops, restaurant, gelato joints and of course our favorite, Fake

David. There are many replicas of Michelangelo’s David throughout Europe and especially Italy. The most commonly viewed-as-real one is this one as it is 1) blocks away from the real one, and 2) it’s right there in Florence. Nonetheless, Fake David was cool and he’d have to do for now as real David’s location was not on my smartphone.

We eventually made it to the river where you could see the the Ponte Vecchio. The Ponte Vecchio has been a bridge, a house, a bridge, shops, a bridge, and is presently a bridge with shops. A law giving the bridge’s shops to almost anyone but butchers came about in the 1590’s and is in place since. At present jewelers occupy the shops.

Prior to the crossing of the Vecchio, John suggested we cross the river and inspect some great sights AND see the view of Florence from the hillside. We trudged the sidewalk to the next bridge, the Ponte alle Grazie. After what seemed like the longest, hot bridge crossing of all time, I asked, “Where to?” John replied, “Let’s just go down to the other bridge and meet up with Patty.” Exploration over.

We then walked across the Ponte Vecchio, took the standard picture with the river in the background and crossed back to the main side. With a bunch of time to kill before the train back, we chose to walk along the river toward the south end of Florence. We maneuvered through various streets slowly winding our way back. In the wandering, we happened upon a school like setting intersected by a parkway. Halfway through we were met by signs requesting silence for MONKS, I think. If it was a monastery, this one was awesome. Bold and gorgeous and especially check out the stairs heading up in the picture on the left. Might not like this as the way to get to my office. Cool.

Eventually we made out way back to the main drag not far from the train station. We had looked at two things near there, a beautiful purse that Linda loved and a leather bag I’d had my eye on. The purse had left the conversation several hours ago, but the bag lingered. I found it sort of by accident hours earlier. 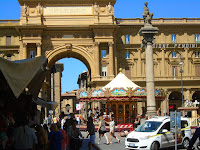 We had turned a corner near the carousel at the Plaza della Repubblica (right next to the H & M, by the way) a place where there were a BUNCH of street vendors selling leather goods. Immediately upon rounding on the city gate side, it just popped into view. There it was, Kevin Costner’s bag.

What? Kevin Costner’s bag? Let me explain. At the end of Costner’s movie For Love of the Game, he is at the airport ready to leave for London and “go get the girl.” Well, Kevin is dressed REALLY well (after all he is a millionaire baseball pitcher in the movie). But better than his awesome coat, better than the very cool shirt, he has this leather carry-on bag over his shoulder. Through the years while Linda has lusted for

Kevin, I have longed for the bag. And there it was. Through some streetwise haggling, I left with the bag at what I believed to be a great price. It was my best Italy purchase and the one I still am amazingly excited about.

Bag in hand, we met the entire gang near the train station and headed back to Lucca on the train. Armed with a little time between the train’s arrival, the drive to the villa and the second catered dinner, everyone hung out and relaxed.  Hung out: translate – drink and talk.

The second catered meal was, like the first, supposed to be a highlight of the trip. It certainly was expensive enough to be a highlight. And maybe for the finely tuned palates in our party, it was. For me, not so much. But tonight was seafood night, so I was optimistic. Our main chef was a repeat from the first night, our assistant was the first night’s assistants Mother.

The first moments are spent with, of course, wine. Chianti Classico is the buzz (not only for the day but for the entire stay) and as I have for most of my entire life, I pass. Just not an alcohol guy and especially not a wine guy (I can whine with the best, however). Next can the

clams/mussels/oysters. To be honest I don’t know which they were, I treat them all the same: no! Maybe it’s a traumatic childhood memory of my Dad eating sardines in his easy chair, but sorry – can’t do that consistency and that “slider” thing down my throat.

At some point the fish were presented to us. Four little guys, maybe 12 inches each. I imagine they’d already met their fish maker, so they were about to meet their fish maker (see what I dd there?). Anyway, by the size of the little guys, I could not imagine how we were going to main course 12 people with them. Well, I was right. Not much fish on the plate as you can see.

On the upside, the bread: awesome. The gnocchi with walnut sauce: excellent. The roasted potatoes: very very good. But after the thrill of trying potato pizza today, everything else didn’t quite make the grade. Interestingly, the second catered meal was a turning point for me: every meal from here to the end of the trip was excellent (or maybe it just seemed that way). Yum.