It’s The Little Thing That Gets You. SF Half Marathon Report 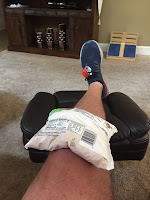 The last few weeks, my knee has gone from good to great to lousy and back. There have been days when walking was painful but as soon as a run would begin, the pain went away. Weird, right? I confess that recently I’ve had more good days than bad, however, so I was excited to test my “somewhat better” knee at the San Francisco Half Marathon. The problem: the little thing that was becoming more and more consistent.

The little thing? Yep, the little thing. When it comes to an injury, sometimes they bring pesky little things, sort of injury outgrowths (like those pilot fish that cling to the whales). In the case of my knee, the little thing has been this popping/cracking thing that only seems to happen on downhill parts of runs. I determined it had to do with hyperextension of the knee. Mostly happening on steep descents, especially right at the outset of one, so….. I have focused on footstrikes and landing patterns that minimized my knee’s opportunities to engage that uncomfortable activity.

It wouldn’t really hurt. It would pop/crack, and feel like it was unsupported. Then the next step, it would be fine. Weird, right? The issue was that some runs would go without this annoyance, on others it would be an “every five minute thing.” The last few days….. nothing.

Off to the Golden Gate City I went in the hope that my new found painlessness might hold up during what is lovingly called the Second Half Marathon. You see, San Francisco has a full marathon, and two halves. The first half covers the initial 13.1 miles of the marathon course, the second covers the final 13.1 (tricky, huh?). Originally scheduled to conquer the first half, I changed to the second when the race sponsors eliminated the Golden Gate bridge crossing from the course. 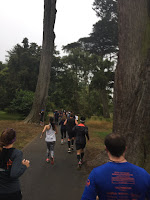 Almost the first six miles (5.7ish) of the course happen in Golden Gate park, a very nice place with lots of trees and a plethora of hills. While the first mile is mostly downhill, the second and third have some serious upness to them. My plan was to run under control and steady through the park and then unleash my awesome second half surge. I have to say that, for the most part, I executed that plan pretty well. In fact, my fastest mile was mile 8.

One of the perks of the Second Half Marathon was that once you left the park, it was all downhill. Allegedly. HA! So much for that. Don’t think so. Now, I have to say, it WAS mostly downhill. Some of the uphills, however, were long or steep. And with those came long (not too bad) or steep DOWNhills (THOSE were a problem). Amazingly, however, I was on a roll. Then, just before the 10 mile mark, the first pop hit. I audibly announced, “OUCH!” It was a bad one. I nonetheless trudged on.

Then at about 10 1/4, I was hit with what Redd Foxx would call, “the big one” (“I’m coming Elizabeth…”). This time I not only reiterated “OUCH,” but almost went down. That was it. It was all downhill (from a pace and pain perspective) to the finish line.

I don’t know for sure, but my crude calculations show me losing somewhere between 4 and 5 minutes jogging in the last three miles. What could have been a decent Half, turned out just like the others; moderately disappointing. Not fun at all. 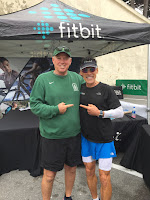 The drive from SF back to Vallejo brought with it stiffness and swelling. An afternoon of frozen corn has done little to relieve either. The worst part is that barring some sort of recuperation miracle, the 200+ day running streak is likely ending.

On the upside, we have had an awesome time here in the Bay area with Linda’s family. The Expo and shakeout run yesterday were fun. AND I was, once again, able to hang out with the man, the myth, the legend, Dean Karnazes.

I originally met Dean (the Ultramarathon Man), in 2012 at a race in Georgia just two weeks after I had broken through the 100,000 mile barrier. After the shakeout we chatted about creeping up on 113,000 miles and 52 years as a runner. It was nice (Dean always makes you feel like YOU are the inspiration, not him).

In the end, it’s time. It’s time to take this knee thing seriously and have someone else look at it (my original “surgeon” will never get to see it again). Something is going on in there and I guess it’s time to find out what.