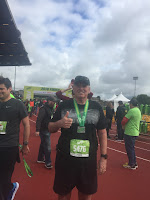 After a nice two weeks of training in the lovely State of Idaho, I was ready to face the always challenging prospect of “racing” the Eugene Half Marathon. What  follows is my evaluation of that race…

I rolled in to Portland early Friday morning after a late flight from Boise Thursday night netted me about 4 1/2 hours of sleep. Undaunted, I decided to have a little fun prior to race day. Just outside of Portland is the Nike World Headquarters and I needed to get in a run. Theoretically, the HQ (as we insiders like to call it) is designed to be strictly for the use of Nike athletes and employees. I figured this: I bought my first Nikes in 1975, if that doesn’t make me a Nike athlete, I don’t know what would.

I parked the car, emerged to grab some things from the trunk, and lo and behold, there is Nike superstudette Amy Cragg. I say, “Hi Amy!” Amy says HI and I notice she looks tired/cranky. I decide our conversation is over. Then it’s off to run the Hollister Trail. Across the street from HQ, the Hollister is a 1.5 mile loop crushed rock trail that was (because it 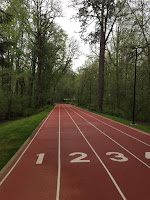 was lunchtime) full of folks enjoying the trail. I get in just under 6 miles and then detour to the Michael Johnson track, surface of the stars. Amazingly, I get in a couple of laps without incident.

I say, without incident, but I guess there was ONE. About 3 miles into the run, I trip on a root and go down like a ton of bricks. A nice lady inquires about my well being, says I should be careful of those “root-snakes” and we move on. The fun doesn’t end, however, back at the car it takes 20 minutes to find my wallet and then a usable bathroom for my bleeding knee.
Time to exit HQ.

Next stop is Eugene and a check in at a cozy little Airbnb place. I exchange pleasantries with the owner and get settled in. What next? Maybe a quick stop at the expo to pick up my number and a swing-by at Hayward Field to check it out.

The Expo was okay, as Expos go. I loved the Oregon Track Club booth (I AM a member, 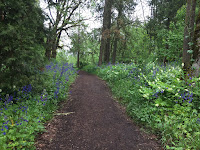 you know), was disappointed with the sizing of the mediocre race T Shirt, but okay with the overall days happenings. After a tasty meal at the Agate Alley Bistro, bright and early, I am off to dreamland.

Other than a fabulous 8 mile run on Pre’s Trail, Saturday was uneventful. I poked around the Expo a little more, went to the Eugene Running Company, and mostly laid around. But Pre’s Trail, made the day. I love that trail and simply couldn’t stop running. It is the embodiment of one of America’s greatest runners and it’s a shame he never saw his vision firsthand (Steve Prefontaine died about four months before the trail opened). It was packed with a nice mix (probably) of out of towners and locals. Then…… it happened.

I was slipping out after sundown to grab some bananas for the morning when I opened the fence and bam! A mosquito flew straight into my mouth. I tried desperately to both swallow and/or hack him out. Neither was easy. Finally, I figured I had beaten the monster. Now, the only thing that remained was careful monitoring to see if 1) he has stung me in the throat, 2) it would swell to the size of a melon, and 3) I wouldn’t be able to breathe come morning. And West Nile……. don’t get me started. 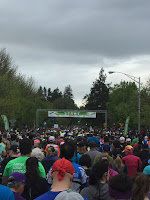 I awoke bright and early on race morn, drove to the shuttle lot and proceeded to have forgotten my wallet. Thinking it would come in handy post race, I blitzed it back to Casa de Eugene, retrieved it (wallet issues this weekend?), and made it with time to spare. After a mile warm-up, I moved quickly to Corral E for the start.

When it said, Corral E, on my number I didn’t think much of it. WRONG!!! Corral E was the last group to leave. Filled with walkers and people who appeared much slower than even me (which is not an easy task), I cursed my stupidity at not checking out the corral when I moved my entry from the Marathon to the half. Live and learn, right?

Then, the race began. It was right as the first Corral departed that I completely reduced my expectations for the day. Fortunately I was wrong. While my first half mile was a testament to lateral movement and supreme coordination (passed in about 6 and a half minutes), I found some room on the side of the road and began moving.

The course was fine, hillier than I thought, and my pace was even. I have no exciting moments to share (although I hear I butt dialed everyone from my phone -21 times to be exact). I kept a good steady pace, never going beyond that semi-comfort/discomfort place of early pacing. I never felt great, but never felt lousy either.

My goal was to run 2:15. I ran 2:13:30. Heart rate 154, which is indicative of my semi-effort. The best part was finishing on the Hayward Field Track. A decent crowd was in the stands and along the side and it made for an epic finish. I captured the 200 meters via video and will not torture you with the contents.

All in all, it was what I wanted; an honest evaluation of my current fitness. The realization is that my next move needs to go from running to training. My next big test is the Dexter to Ann Arbor Half on June 3. I ran the first Dex to AA run in 1974. We have history. I’d love to get in sub 2:00 shape by then.

Well, after two weeks on the road and a plethora of exciting experiences during the Tour de Teaching Idaho and the Eugene Half, I’m happy to head home. In the meantime, Run with the Run.