Ouch! And where was Jenny?

After an amazingly good running week, I thought I would save the best for the end. I thought, somewhere in my twisted mind, that it would be a good idea to run Magnolia Road today. And to make things worse, I decided to run from the West end. I say worse because West to East means UPhill on the way back. Maybe not my best decision. Nonetheless, the decision was made. (now as an asterisk to this West start, I should add that my son Ryan drove and in order for him to get in his own activity – some fishing on the Boulder Creek and Barker Reservoir – a Western start was deemed most practical – by me).

The first few miles went nice and easy (after the initial break in period) with me mostly calculating each downhill I met knowing full well that the downhill would be an uphill on the way back. My run began at roughly 8:30 am and there was pretty much no one else on the road, except car drivers acting like this high altitude dirt road was the Indy 500 track. As I trudged on, more and more runners emerged and the traffic increased. And the drivers acted no better as the run continued.

The run began with a healthy breeze following me from the west. Noting (again) that I would be returning on this same stretch of road (UPhill) I was dismayed to think that the trip back would be UPhill AND into the wind. Perfect.

I got into a decent rhythm during miles 4 to 6+ and then hit “the hill.” “The hill” is usually the final mile of the return trip when Mags is run from an East starting point. I have to confess that I took this mile long UP better than usual, mostly because I was running it considerably earlier than usual. Once I hit the pavement at the top I kept going a bit to get in 16, instead of the dirt road’s out and back 15 miles.

The trip DOWN “the hill” was awesome. I might have even gone a bit too fast. In theory this quick pace should have been the boost needed to catapult me up the steep first hill back. While theory is awesome, reality is different. This began what we runners like to call a “bad patch” that lasted until about the 10 mile mark. Once at 10, I unexpectedly fell into a “good patch” (gotta love those). My good patch lasted until about 13 1/2. BY the way, another upside was that after about two miles of the return trip, the wind shifted. The rest of the way it varied between cross wind and tail wind (awesome climatic break).

At about 13 1/2, every little UPhill became a pain. And some of them were some steep little (big) pains. To say that the wheels came off my little wagon might be an understatement. You see, the thing about Magnolia Road is that there is no flat. At any given time, you’re either running UP or down. As the elevation map at the beginning of this offering shows, it’s mostly UP going back. So I pressed on, enjoying the occasional down and being reduced to a whining, slogging, jog on the UPhills. Then it happened. 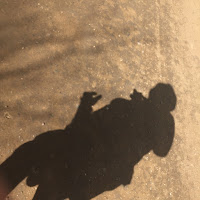 In the distance after cresting yet another hill, I saw a familiar figure walking along the road. Turns out that Ryan had been hiking around some trails awaiting my return. He said, “you have less than a mile to go.” (I knew that) I said, “and there’s only one hill left, RIGHT?” “Yep.” YAY! BONUS: company till the end. So we moved on.

I confess to having walked at the steepest part of that final UP, but was happy to crest it and enjoy the final quarter mile or so of downhill to the finish. All in all, I had lived through a 16 mile run on Magnolia Road.

Unfortunately, I never saw Jenny Simpson. I was hoping for a Jenny encounter to match my last solo Mags run (http://runspittle.blogspot.com/2016/03/magnolia-road-lives-up-to-its.html). And to make matters worse, upon arriving home, I discovered that World Steeplechase Champion Emma Coburn went long and hilly today, but did it on Gold Hill Road. Damn!

So with Magnolia Road in the bank, I logged 65 miles this week, many of which were awesome. I’ve cleaned up my diet a bunch and actually lost 5 pounds this week. That’s a mere blip on the radar screen of what needs to be lost, but we have to start somewhere.

Five weeks to the Eugene Marathon which will most probably be a Half Marathon (most probably means 99% sure). After today, that sounds SO much more appealing.

So, thanks for reading, feel free to converse below and run on. Or as Eliud would say, “Run with the run.”