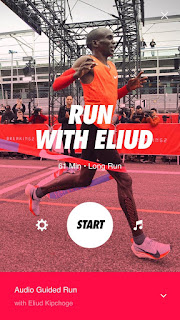 Those of you who frequent this blog offering vividly remember my run with Jenny Simpson (grossly exaggerated). You can find it at http://runspittle.blogspot.com/2016/03/magnolia-road-lives-up-to-its.html . Well this morning, even more grossly exaggerated, was my run with marathon G.O.A.T. Eliud Kipchoge. I say MORE grossly because at least Jenny was on the same road as me….. like, IN PERSON. My run with Eliud was a dabbling into the Nike Run App and an audio run.

First things first, if you’ve never done a Nike audio run before, it’s kind of lame. Not lame in that it’s a completely bad idea, and not lame in that Eliud didn’t have some great things to say. It’s lame to really think that you’re running with Eliud Kipchoge. Having said that, maybe it’s not so lame as I run often with the likes of Gary Vaynerchuk, Tony Robbins, Seth Godin. And they don’t even talk to me about running. Hmmmm….

In my 52nd year of running, I’ve pretty much heard it all. Kipchoge, however, is the Zen Master. While chatting some about how he got started and while being questioned by “Coach” Bennett, his answers were the stuff documentaries are made of. But when pontificating on issues like why he loves running and what he thinks about out there, the Zen Master was awesome. My favorite Kipchogeism:

Eliud only made it an hour. Unfortunately, I needed to run for an hour and 45 minutes or so. I had to leave him behind. Sorry Eliud. I have to confess this to you folks: I actually ran better than I have in a long time (must have been the company). Thanks Eliud.

So long story short, the week was okay. 44 miles. The plan says next week at 50. We’ll see about the Eugene Marathon. There’s ten weeks to go and my mileage should be in the 65-70 range right now. On 45 year old knees, I’d say NO sweat, BUT…..  So, I’m contemplating a drop to the half marathon. Whatever. No decision needs to be made that soon.

My knee has felt better this week than it has since last summer (and for sure since my surgery warranty ran out  http://runspittle.blogspot.com/2017/12/trash-2017-and-one-year-warranties-suck.html ). I’d rate the discomfort as a 3 on the 10 scale and today, probably a 2. I have another week where I don’t travel so I’m hoping to make even more progress.

So, here’s that one step forward thing. All I’d like is to keep stepping FORward.

Run with the run.