My Attention is in Berlin and my Butt 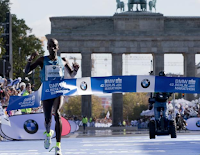 Week three of the road to the Super Bowl has begun. The World Series is just around the corner. Who cares? Sunday morning is the Berlin Marathon and I am psyched.

Yep. most experts are saying that barring the unforeseen, which is always…. unforeseen, a new world best is expected. The pacers are scheduled to take the runners through on world record pace. The participants are talking about running fast, so 2:02:57 could be in jeopardy. So, who’s running? Three guys and of course thousands of others. Mostly three guys.

Kenenisa Bekele:   Current best at 2:03:03. One of the greatest 5 & 10K runners/kickers is the defending Berlin champ. While terribly fast, it’s unsure which Bekele will show up. Will it be the tough, fast, runner from last year’s Berlin, or the inconsistent one who did not finish in Dubai in January and was 3rd to Kipchoge and Stanley Biwott in London in 2016?

Wilson Kipsang:   Current best 2:03:13.  Prior to Dennis Kimetto’s world record run, Kipsang held the fastest time. Kipsang’s strength is his consistency. Four times he has run under 2:04:00. He is also the only one who has beaten Kipchoge over 26.2 miles.

Eliud Kipchoge:  Current best 2:03:05. Kipchoge, I will admit, is the man in my humble eyes. Coming off the Nike Breaking2 project and running 2:00:25 in “artificial” conditions in early May, Kipchoge has extreme momentum on his side with that run as well as an easy Olympic Marathon win. Moreover, he is the marathon Zen-Master. Listen to this guy talk about running, marathoning, and life and you will be dazzled by his coolness.

Butt Update: Went to a highly recommended physical therapist Wednesday, and lo and behold, I have been right all along: piriformis syndrome. SO….. slowly we have the magic exercise in place and hope to be in the land of pain-free for the New York Marathon in a little more than six weeks.

Nothing against the previous “experts” I have seen, but I know my body and I KNEW what was wrong with it. Just been unsure about the treatment without the proper guidance. Hoping to have it right now.