Saturday, under the crisp morning sky of Georgetown, Colorado, two things happened: I celebrated 51 years of running, and warmed up for the Georgetown to Idaho Springs half-marathon. Let’s begin with the long view.

51 years. That’s a long time to do anything. I actually believe that the only other things I have done that long in my lifetime is be a son and a brother, and a learner. It’s a long time and a hell of a commitment.

I was “discovered.” Yep, like Elvis, like The Beatles, I was discovered. I never intended to be a runner, I was going to be a baseball player. I could hit, I could pitch, and I could obtain my Dad’s approval. Then….. I was discovered.

It happened in PE class. We did this thing once or maybe twice a year, called the distance run. In reality, the distance run was around 3/4 of a mile. It seemed like a long ass way to me, as well as my classmates though. The first time I did it (7th grade, no middle school back then), I have no idea what my time was. Might have been around 4:26 (that seems kind of exact for not having an idea, right?), but I remember running well ahead of my JHSPE mates. The Junior High record was 4:10 but I didn’t learn that until 8th grade when I ran a time of 4:02 (my first, and one of a very few, records). No matter, it was still the dreaded distance run and we hated it.

While those are moderately fuzzy memories, I remember the 9th grade distance run like it was yesterday. I was confident and actually looking forward to my opportunity to make that giant loop of the Abraham Lincoln Junior High fields. 3:36! The next day, my PE teacher Mr. Eldridge said that someone wanted to see me. It was Coach Al Pingel, the high school cross country and track coach. That was all it took. I was discovered.

Much to Dad’s disapproval, I decided to run cross country in high school. Practice began Monday, August 15th. Deciding that maybe I needed to get in shape prior to reporting, on August 12, 1966, I went for my first real run. That set off a crazy chain of events over 51 years, without which, I would be nothing close to the person I am today or have been since. While many a tale has been written in this very blog about my slightly better than mediocre career as a high school and collegiate runner, I will say this: I owe a lot to that decision.

That brings us to Saturday and the Georgetown to Idaho Springs half-marathon. As I have noticed since my knee surgery (a little over eight months ago), I am very shy and considerably nervous about any “test” of my knee’s fitness. Each longer run, every knee exercise, each “race,” has me in a tizzy wondering if this is the time when my knee will buckle and it will all be over. (Hey, just because I’m paranoid doesn’t mean my knee is not out to get me.)

With training runs around 12 minute pace (yeah, turtle-like), I decided I would begin very easy and try to get comfortable in the mid 11’s. The GTIS is mostly downhill, so added concern about pounding also entered into the equation. My goal was two (actually three) fold: 1) get to the finish line comfortably with no knee issues, 2) run under 2:30 (11:26 pace), and maybe 3) on a good day run under 2:25.

At the starting line I cozied up in the group between the 2:25 and 2:30 pacers. Seemed like a good place to be. The starter yelled “GOOOOO” (very classy) and we were off.

My plan was to stay with the group for another mile and a half and then push it in for a sub-2:20. The plan was short-lived. No sooner did I join this pack, I was greeted with a chattering group boisterously discussing television commercials and last dates. I HAD to leave. In my haste to deliver myself from this “conversation,” I dropped in a 9:59 and I was gone. The next two miles were controlled and, I have to say, fun.

I arrived at the finish line in 2:17:38 and was pretty stinking happy. Granted, I have run fifteen miles in 1:24, which means I probably passed through the half marathon in 1:14 and change, but that was in the 70’s. Expectations, as well as the “zone of acceptable performance,” has changed immensely since 1975. So, I was/am happy!

The best part was that the whole thing was easy. My knee was great! Everything else worked fine and with the exception of this pesky little hotspot on my right foot, I’d call it almost awesome. I confess to having been in quite the good mood the rest of the day.

With this satisfying performance, of course, comes the reality that I am able to hold a quicker training pace than the one I have been doing and that it’s time to actually begin mixing in a few real live workouts.

The New York marathon is in a little less than 12 weeks. Prior to Saturday, I only hoped that I would finish and dreaded that it might take more than five hours (or even longer). The GTIS tells me that with many weeks of training ahead, I may easily be able to run under 4:30 which would be a great post surgery goal. Excited to see how it unfolds.

While I was happy with my own “race,” it was pale in comparison to the “race of the century;” the women’s 3000 meter steeplechase at the IAAF World Championships in London on Friday. The Steeple (something I ran in college) is slightly less than two miles run over 28 barriers and seven water jumps. Please note: barriers, not hurdles. When you hit these things, YOU move, not them.

Historically, East Africans, almost entirely Kenyans dominate the event. Only recently through the efforts of Jenny Barringer (now Simpson) five years ago and Evan Jager and Emma Coburn (medals at the last Olympics) we have gained respectability. On day five, Jager earned another bronze setting the stage for Emma maybe, just maybe, medaling as well. The rest is history. 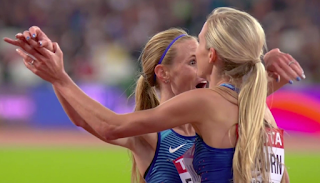 With a lap to go in the women’s steeple, Linda and Roxy (we were dog-sitting) ran into my office alarmed by the noise of this lunatic guy pounding on his desk and yelling uncontrollably. Soon the reason was clear, Emma and USA teammate Courtney Frerichs had gone 1-2, taken Gold and Silver, something that NO ONE could have predicted, or even dreamed about prior to the race. It was the perfect race, executed by two women on the same day in the same race. It was beyond IMPRESSIVE.

Emma set a new American record by almost five seconds and Courtney set a PR (personal record) by sixteen. And while the race was incredible, the post race celebration was, as they say, priceless. If you missed it and would like a little inspiration, go to http://www.letsrun.com/news/2017/08/watch-emma-coburn-courtney-frerichs-stun-world-go-1-2-womens-steeplecase-2017-world-track-field-champs-video/. Many, many props to these fabulous racers!