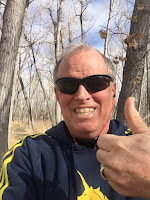 My last real run was back in September, the 24th I believe. It was a very sore, almost crippling 5 miles on the Highline Canal. Since that day, almost a half a year ago, I have run about 30 miles. I have gained 20 pounds. I have blamed my doctor, poor physical therapy, old age, bad luck, and just about anything or anyone I can blame. I’m done. It’s all on me from here on out.

My first real run, if you want to call my 13+ minute a mile shuffle that, since the December 1st surgery, was 2 1/2 miles on February 16th. I really thought, first off, it would be sooner than that. I mean, football players get scoped and are back on the field in three weeks. And I am traversing nothing. It’s straight line city, baby. So why did it take so long? I can answer that in three words: sixty-five years old. So, let’s attack this thing like just that: someone who has been on the planet for sixty-five years…..with wisdom.

First, I will stop bitching about my surgeon. Mindset is everything and frankly, while I think she did a token job/went through the motions, I have to get past that. So, that’s it, surgeon rant over (and it didn’t really begin because I could REALLY elaborate on that one).

Next, I need help, so I will get some. I’ve tried to do what I have done for almost a half a century; cure my running ills myself. Well, after a very frustrating last 2+ months, we’re starting with the wonderful Dr. Carly May tomorrow morning. We’ll see where it goes from there.

You see, I don’t have much pain, if any. My biggest issue that turned today’s run into a walk is support. I just feel like the thing is going to give out. Maybe it’s screwed up big time, maybe it just need to get stronger, maybe it just needs some K-Tape for some kind of support. Carly will know. She’ll also be great to suggest the best strengthening exercises and some other PT like stuff.

Sadly, I have spent the last few months being complacent with being a partial/non runner. I avoided my magazines, stopped watching running videos, and basically tried to deny who I am. Then, somehow tonight, I found Billy Yang’s latest movie, Life in a Day (https://www.youtube.com/watch?v=kYgcTJBLwsU). Then I found his 2016 recap. Then I found Jim Walmsley, Kilian Jornet, and then it was all over. I recaptured my love. Just like in a corny movie, my running pranced toward me in slow motion. I ran towards it in gimpy slow, slow motion. We embraced (you had me at hello).

Last year this “issue” cost me my running the San Francisco Marathon, the Squamish 50K, and the NYC Marathon on my 65th birthday. And not just the experiences, but like $600 bucks! And frankly, I’m sick of this. I have run almost 110,000 miles and I’ve got news, I’m not finished by a long shot.

Thanks Billy. Run on.