The Six Pillars of Peak Performance 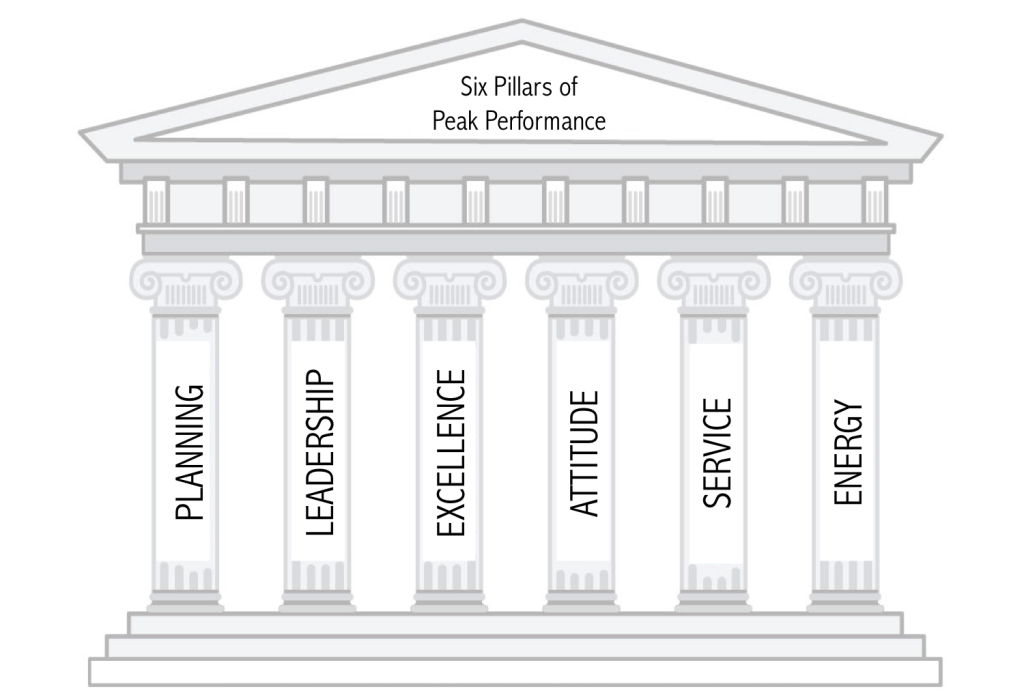 A pillar is, according to Merriam-Webster, “a firm upright support for a superstructure.”

If you want to support that superstructure which is your business, or even your life, you need strong pillars. And the more super you want that superstructure to be, the stronger your pillars must be in order for it all to work. At the core of Peak Performance is Six Pillars. They are Planning, Leadership, Excellence, Attitude, Service, and Energy.

Alan Lakein said, “Planning is bringing the future into the present so that you can do something about it now.” Whether you’re creating a peak performance business or scheduling a trip to the beach, planning can be essential in success.

Planning is at the core of business success and Peak Performance for five good reasons:

Benjamin Franklin said “fail to plan, plan to fail,” or something like that. He was right.

The second pillar is Leadership. A Peak Performer is a leader. They are leaders in their business, their communities, and their families. People seem to believe that at the core of leadership sits power. If you have power, you have influence. John Maxwell said, “Leaders become great, not because of their power, but because of their ability to empower others.” AND, there is a big difference between being influential and being of influence.

So, the question is, do you know enough to perform in an excellent manner? While knowledge isn’t everything, the more you know….. well, the more you know. Try placing a product in the marketplace without knowing both the product AND the market. Doomed for failure.

Excellence is also reflected in the skills we possess and whether we have the tools and resources available to both be excellent and display that excellence. True excellence can lead to expertise. In his book, Outliers, Malcolm Gladwell references the 10,000 hour rule, asserting that the true experts at anything took 10,000 hours of whatever they did before they reached that status. While scientists, sociologists and other critics have since heavily criticized the 10,000 hour rule, here’s what we know: we learn from repetition and the more you do something, the better you get at it (at least if you do it right….but that’s a whole other story). I digress.

If I show up at Best Buy intending to purchase the perfect computer (at least perfect for me), I want to work with the computer expert, not someone who alphabetizes DVDs for a living. There is value to expertise and knowledge.

Attitude. Your attitude, I was told decades ago, determines your latitude. Attitude isn’t just about good or bad; positive or negative. Your attitude, generally, is based on your belief system and how you choose to interpret the world around you. Key word? CHOOSE. You can choose your attitude.

We don’t come programmed to look at the world in a particular way, we all develop the way we see things and how we interpret those things. Is it easy? Don’t some people just have “better” attitudes? Maybe. But I doubt it. I think they work at it. Attitudes are influenced by confidence; self esteem. They can be trained through visualization and focus. The key is that we already have the key. William James said it this way: “The greatest discovery of my generation is that a human being can alter his life by altering his attitudes.”

The fifth pillar is Service. It was Mahatma Ghandi who said: “The best way to find yourself is to lose yourself in the service of others.” We seem to live in a me, me, me world. One way to stand out in that self-centered place is to focus on others first. Most of us, given a life-threatening situation, would protect our loved ones before ourselves (at least I like to think that). That self-second philosophy also works well in business. Consumer oriented businesses; those who put the consumer first, seem to succeed at a much higher frequency than those that focus on selfish motives.

Are you and/or your business other oriented? I hope so. To me it’s a necessity. It was Muhammad Ali who said, “Service to others is the rent you pay for your room here on earth.”

The final pillar of the Peak Performance Edge is Energy. It is possible to be a planner, a leader, excellent, have a darn good attitude, and be of service and still fall short if you don’t have, or don’t have the right energy. Jim Loehr refers to energy as the “currency” of peak performance. He suggests that we possess four kinds of energy: physical, mental, emotional and spiritual. Physical energy or capacity, Loehr believes, is defined as the QUANTITY of energy; how much do we have. Mental capacity is defined by the FOCUS of energy. Emotional capacity is defined by the QUALITY of energy. And spiritual energy is defined by the FORCE of the energy.

I believe that there is energy in Love. While Loehr would probably lump love as an emotional energy, I think it is the highest of emotions. You can tell the people who love, the ones who love what they do, the ones who love life. They embrace and optimize every moment. We can get by without love, but it is a part of long term success, long term peak performance. It was Lao Tzu who said, “By accident of fortune a man may rule the world for a time, but by virtue of love he may rule the world forever.”

Your Peak Performance Edge is a complicated, yet simple path anchored in the six pillars: planning, leadership, excellence, attitude, service and energy. Everyday we can take a step in that journey.