The Challenge Is ON! or is it really? 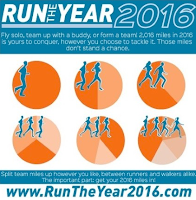 I have accepted the challenge. Or I guess I did. It was going to happen anyway, so why not make it official? Yes, I have joined the 2016 miles in 2016 challenge.

Two great guys, Adam Goucher and Tim Catalano at Run the Edge, have created this outstanding multi-layered challenge for people wanting to get off the couch (or easy chair, or wherever). For more info, go to http://www.runtheyear2016.com/. Very cool.

Anyway, like I said, barring the unforeseen (which, by the way is not seen), I will run at least that in this calendar year anyway. In fact, I have not run less than 2016 miles in any of the last seven years. The average miles per year during this little “run” is 2470. So, safe bet.

On a side note, went for an 11 mile run yesterday and everything was pretty smooth until the last mile and a half. It didn’t get terrible or anything, just very uncomfortable and slower. Not bad though and pretty happy about the whole thing. In addition, it was my second run of the day, it happened in the afternoon (I hate running after 10 am), it was two hours after pizza (I hate running with a full stomach), and I appear to be in lousy shape (I hate building back up). There’s a lot of hate in that run-on sentence. Note to self, love is better than hate.

January and February are slated to be build-up mile months. The goal is to get up between 55-65 miles a week without incident (injury). Once there, we’ll begin to seriously consider actually training and scheduling some tests (races). All in all, other than a little nagging Piriformis pain, I have little or nothing to complain about.