Mt Bierstadt and the Week of August 31. 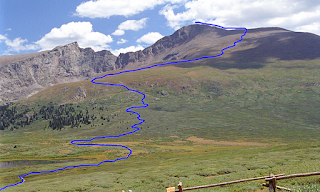 Less than a week to go until the Imogene Pass Run (Sep 12). To work a little on the impending vertical of that Ouray to Telluride journey, I decided to tag a 14er this week, Mt. Bierstadt (14,060).

I’ve lived in Colorado since 1978 and have run many miles while here but I have to confess that this week, this 14er, was only my second. Yep, number two. In 1979 I ran the Pikes Peak Marathon and now this.

The drive from my lovely dwelling in Aurora was simple and about an hour and a half to the top of Guanella Pass and the trailhead. Once there, I loaded my hydration pack (H2O, Clif Bar, Honey Stinger gels, a jacket and gloves) and headed up the trail as soon as possible.

The first half to three-quarters of a mile is actually downhill. This was/is a two edged sword. While the downhill is nice and it allowed me the opportunity to warm up a little and get into a bit of a rhythm, the nature of this run was UPhill, so the early descent was, at best, misleading.

The first mile or so of uphill was moderately gradual. The area was highlighted by a singletrack trail surrounded by four foot high bushes. I named it the “bush trail” (yeah really clever, I know). Once emerging from the bush trail, things got steeper, a little rockier, and more interesting. There were several sections during this transitional area that were downright tough.

Like most mountains, the higher it goes, the more challenging it becomes. From about 2 1/2 until 3 miles up, it was pretty steep and plenty rocky. Several sections had me wondering how the descent might be. Once 3 miles hit, the trail pretty much disappeared and running or even really hiking gave way to rock scrambling. The key in these tough terrain situations, I believe, is to keep moving. Keep moving, keep moving.

Finally, after about a bit less than two hours, I hit the top. I took a few pictures, did the Chevy Chase Grand Canyon look around and began the descent. As bad as going UP the rock field was, going down really made me nervous. You see, I’ve been known to trip over blades of grass on a trail. For some reason, and I’d like to attribute it to savvy running and incredible conditioning, this time I navigated the danger zone unscathed.

Then it was time to go DOWN. Some of the descent seemed so steep that I became mildly impressed that I had made it up in the first place. Mostly, it felt nice to be going down. About halfway down, I noticed a grey haired man walking up and waving. So I said, Hello! He says, “Can I ask you a question?” I say, “Sure.” “How old are you (at this point I am noticing that it sounds like he is from India)?” he asks. “63,” I respond. Then he says, “God bless you, sir. My friends in Southern California don’t think anyone our age can even walk up one of these. I’m here to prove them wrong. God bless you and keep you safe!” I was, to say the least, touched by the warmth in his voice. SO, we had to get a picture…..

I rode that little high all the way back to the car. All in all, it was both challenging and fun. I’d like to go again before the snow hits now that I know what to expect but also have my sights on a few others too (Grays, Torreys, Elbert, maybe Lincoln). An observation: while I’ve lost 42 pounds in the last five months, Lance Armstrong was right: you become a better climber by weighing less. So maybe another twenty pounds (or more) is in order. Well, actually that goes without saying (writing).

In case you’re interested, my video/documentary of the run can be found at https://youtu.be/g4fRBbZJ6Jc . CAUTION: this is 11 minutes of your life you will never get back. 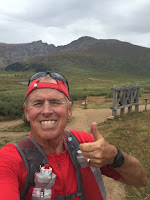 The week ended with 70 miles logged, the twelfth week in a row over 70. I’m close to 1800 miles for the year and could easily hit 2700 for the year as long as I can stay consistent and healthy. That would be my best year since 2000.

So, I’m sort of looking forward to the ten miles up Imogene Pass this Saturday (in a weird way), but first I’m excited about a Labor Day Bar BQ and trail run with the great ultrarunner Emelie Forsberg (a.k.a. Kilian Jornet’s girlfriend) sponsored by Runners Roost Denver. Should be very cool to meet Emelie! In fact she just won The Rut 50K today and will be here tomorrow (Monday). Yikes.

Have a great week. Run on.