I’ve Fallen Down and I Can’t Catch Up: My Run “With” Emelie Forsberg 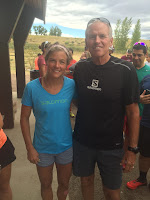 “I saw that going differently in my mind,” said Will Smith’s character in the movie Hitch. While he had seen his Ellis Island date turning out much better than it actually did, I too had envisioned my run with Mountain Ultra Trail running superstar, Emelie Forsberg.

I figured that at some point in what I thought would be a 6-8 mile run, I’d get a chance to move up along side and ask my two questions: 1) What could a chicken old man do to get a little more fearless on the downhills and 2) What parts of Kilian have rubbed off on her to make her a better runner and person, and what has he received from her.

Then reality happened. First the 6-8 mile run I had expected became a 20 minute jaunt. Really? In afternoon runs, it takes me a half an hour just to catch my breath and warm up. I’m a morning guy. 20 minutes? Next, the unthinkable (but completely predictable) occurred. Just after a downhill which led to a sharp turn and a bridge, I tripped. Down. Boom. Like a ton of bricks. 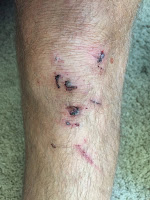 Startled and embarrassed, I popped up immediately. There were some gasps in the group, along with the usual “are you okay’s.” One guy said 8.5. I guess I didn’t stick the landing. Some skin tore and frankly it looked way worse than it was which is always a good thing (it’s the whole sympathy without injury thing) . Nonetheless, my visions of chatting during the run were over. I struggled to maintain contact with the group (and unfortunately that had more to do with fitness than any injury) and finished the 20 minutes feeling incomplete. SO, what do we do when that happens? Well, I go for another twenty in the way I usually do: alone.

My own issues aside, Salomon and Runners Roost put on a very nice event. I’m guessing either side of 80 attendees. After the run, Emelie signed posters and did a Q & A. The event was a catered Bar BQ with a typical picnic fare of burgers, potato salad, a fresh green salad and fruit. All were excellent. 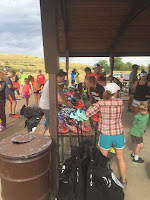 Salomon had easily a hundred pairs of trail shoes at the site. I remember thinking, this is A LOT of shoes, are they for sale, and wait, some of these are dirty. Then it dawned on me, you could test run the shoes (yeah, I didn’t just fall off the turnip truck). But what a cool idea. Test running shoes at an event. Nice job Salomon.

And then there was Emelie. After three races in three days in Montana, she found the patience and graciousness to be wonderful to one and all. She smiled with the fast runners, the slow runners, the kids and a couple of dogs. She was, in short, delightful. And in a sports world where many of the most elite are anything but delightful, she brought fans back to a great place: having the stars of your sport who seem awesome, actually BE awesome. Thanks Emelie.

Thanks again to Runners Roost and Salomon and especially Jenny Taylor, their marketing manager. A fun event.