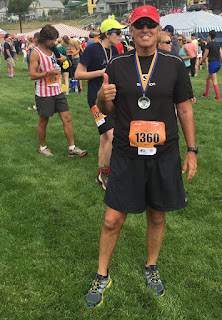 Wow, I knew it had been a long time. The last time I ran the Georgetown to Idaho Springs Half Marathon was twenty years ago. It was August 12, 1995 and I scalded my young friend Geoff Lawton in the process. 1:29:24 for me; way behind for him (yeah, I’m still rubbing that one in, Geoff).

Today, adding twenty years added 57 minutes. Yikes (and by the way, “you’ve come a long way, baby” doesn’t work here)!  Maybe it shouldn’t have been quite that much. I guess that had I pushed myself a little more I might have knocked off another 2-3 minutes. But se la vie!

My goals were to break 2 hours and do it without injury or incident. Mission accomplished. The start was the way most are these days, crowded, with a lot of swerving. My first mile was a pedestrian 9:23. Things broke out a bit and the second was right around 9. Then I got in this 8:40 ish groove that lasted until the last two miles. It felt comfortable.

When in the course of running 13.1 miles, the body goes through a myriad of experiences. Most of the time mine felt pretty good. Occasionally some specific area called for attention. A griping knee, a hip, a hamstring. Never at the same time, mind you, always working in close concert with one another so that I never got to feel TOO good.

I passed through the 10K faster than I had run the Bolder Boulder (which isn’t saying much at all but I’ll still take it).

The course was different compared to twenty years ago.. More trail and gravel now, but neither was anything close to annoying, so while a bit surprised, it was completely okay with me. The GTIS is a net downhill course. I stress the word NET because there are a decent amount of uphills too. But actually few of the uphills were steep or long and for the most part, they were a nice muscular change from the downhill.

All in all, no complaints. GREAT weather, a nice course and lots of fit, happy people made for an excellent day. A couple of observations, however.
1. You can’t run very fast unless you occasionally train fast. I knew this anyway, but today was a reminder. With speed, however, comes potential injury SOOOOO….. we’ll introduce that slowly and carefully.
2. While I’ve lost A LOT of weight in the last four months, I have a long way to go. I began this quest to re-find me at 228.6 pounds, currently at 190.0. I’d say 25 to go. One step (and/or pound) at a time.

Tomorrow we’ll see how we feel. I anticipate tights calves, but a little rolling and some light stretching should allow a better run in the morning. Next stop is the Imogene Pass Run 17+ miles from Ouray to Telluride over Imogene Pass (a completely different animal). With five weeks to go, it’s time to head for the mountains. See you on the trail.