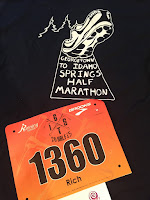 Well, the “racing” season begins Saturday at the Georgetown to Idaho Springs Half Marathon. I carefully place the word racing in quotes as, while I’ll will be at a race Saturday, I don’t really think we’ll do much racing.

Packet pickup was actually a week ahead of time (I REALLY liked that). It was held at the Runner’s Roost in Denver and was as easy as it could possibly be. As you can see, I received lucky number 1360 (not sure if that’s a lucky number, but perception is truth, right?). The T shirt was simple, but cool, so all that’s left to do is run.

Being a goal-centered individual, yes, I have some goals for the “race.” First and foremost (as always) I want to get from Point A to Point B without injury or incident. Beyond that, I have to confess, this is really just a test. I’d like to see what eight weeks of consistent mileage has given me. I don’t expect to be fast as I have done nothing in training that would bring about that result. I’m looking to see what my push-it-comfort pace is. If I could run in the 1:50’s (yeah, that’s a ten minute window), I would be satisfied. Faster than that would be great, slower than that means I chose to not hurt. We’ll see. That’s the beauty of the race.

I had some very nice runs this week. I pretty much stayed in the Cherry Creek State Park all week, but mixed in some things on the Northeast end. As always, the woods were the most pleasurable area. Even there, I tried out a few side trails and reversed direction as often as possible. This week I will cut back to 60ish. Not really any kind of a race-mileage taper, more just don’t want very tired legs come Saturday.

After GTIS, it’ll be five weeks until the Imogene Pass Run from Ouray to Telluride followed by a trail half marathon in Granby later in September. A couple of races in both October and November (maybe a marathon snuck in there), all culminating with the North Face Endurance Challenge 50K near San Francisco on December 5. Too much fun!