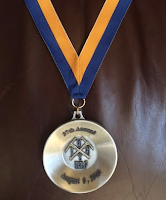 The highlight of this week was my sixth running of the Georgetown to Idaho Springs Half Marathon. Two things: the last time I ran it was twenty years ago. That seems like a LOOOONG time ago. The first time I ran it was thirty years ago. My time this year was 1:56:20 and while I am not displeased with that, it is BY FAR, my slowest ever. Race Report here:
http://runspittle.blogspot.com/2015/08/its-been-twenty-years.html

This next week looks to be exciting as I am in Colorado Springs for two days and hope to hit the Barr Trail. I need some vertical before the Imogene Pass Run and that will be the launching point. The 12th will also mark my 49 year runner-versary.