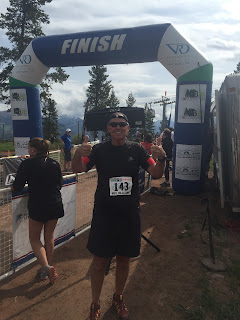 We closed the book on the first half of the year this week. All in all, it was a consistent week where I had hoped to back off the mileage some. Didn’t happen. Still logged 70, but a pretty easy seventy. Spent the first four days in the Cherry Creek State Park for my runs. 7 on Monday, 11 Tuesday, 8 Wednesday and 13 on Thursday.

At days end on Tuesday, not only was the month up at 278 miles, but the six month total was 1023. While I had hoped to be around 1250 for the first half, I can’t complain as I missed three + weeks with my hamstring problem and ran poorly in January and February with my “ain’t got no motivation” problem.

Friday I ran early and then headed to the mountains to go fishing with my youngest son, Ryan. Mid-fishing I decided to sneak in a nice trail run along the South Platte River and break in my new Salomon Speedcross 3 trail shoes. Both experiences were excellent.

The Speedcross 3 is a fairly lightweight, aggressively treaded but surprisingly cushioned trail shoe. My feet took to them quite well with no “break-in” effects, so I immediately decided they’d be okay for Sunday’s Vail Hill Climb. 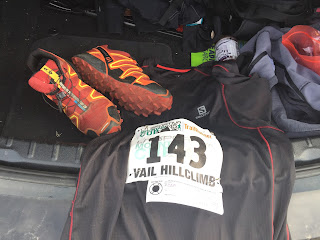 Saturday I thought about an easy day, but couldn’t bring myself to running 4 or 5 miles just to rest for a “race” that I wasn’t really racing. So, I ran 10.

Sunday, I was up at 4 am and off to Vail. As nice as it might have been to spend the night before in a cushy Vail hotel, I kind of like the jump in the car, drive two hours and race thing. It reminded me a little of college racing (that’s by the way, where that similarity ended). I arrived in Vail without incident, picked up my number and headed for Lionshead as that would be the way off the mountain post race.

It never ceases to amaze me how “race mode” sets in when you slap a number on a shirt. Old feelings nestle their way into this old body and I’d swear I was 18 again. Warm up was an easy two, some light stretching (as Rob DeCastella once said, “do they give gold medals for that?”) and a couple of strides. Nothing fancy or particularly effective, but accomplished just the same. At 8 am sharp, the guy yelled GO and about 400 of us set off to climb Vail Mountain. The first mile was a combo of town and the transition to the hill. They made a big deal out of some course alterations, but having never run the old course, it meant nothing to me. I ticked through the first mile near the back quarter of the pack around 13 minutes.

I had three goals coming into the day. 1) I wanted to make it to the top, 2) I wanted to run the whole way (no power walking or even non-power walking) and 3) place in my age group. Two of my goals died by halfway. It was obvious very quickly  that there were some skinny, fast mountain goat dudes taking off from the start. Goal 3, gone.

I ran comfortably through 2 1/2 miles, heart rate staying steady in the 157-162 range and then a steep-ass section hit. My watch went from estimating my pace at 14:50 ish to 17 AND everyone around me was walking and PASSING ME. Goal 2, gone. I walked on three other occasions when it seemed walking was faster than the shuffle jog I was using up the hill. Oh well.

After roughly 5 miles, I could look up a few switchbacks and see people finishing. I had two thoughts: 1) I thought this was 7.5 miles so they must be tricking us up there and 2) God, I hope they’re not tricking us up there. Turns out no trick. Final distance about 10K (6.2 miles). I shot a video as I finished (seemed like the right thing to do at the time), said hi and thanks to a few people I had run with from time to time, and headed down to the car to change for a little cooldown run, and hoped to beat the Independence Day weekend traffic.

First a quick stop at the Salomon store to thank them for the Speedcross recommendation (and by the way, they were awesome shoes), then on the road. An hour and forty minutes to Vail, three hours and forty-five home. Really sucked. All in all, as mentioned, ended the week with 70 miles, the third week in a row at 70 or more.

So, lessons learned: 1) I had no problem whatsoever with the altitude. I was extremely happy about that. Imogene will be a little higher, but we’ll deal with that later. 2) I’ve lost about 30 pounds in the last three months and it is CLEAR that I need to lose the next 30 before there will be any serious race results. Fat guys cannot climb, 3) it’s still fun to throw on the bib and run the race.

No ill after effects today (Monday), but may still back off a bit this week. Or maybe not.