As a youngster, I learned how to do math by calculating batting averages, earned run averages and other extremely important baseball statistics. “Baseball is a game of numbers,” they said. And I suppose they’re right. But running, obsessive running, is as much so or more. Mileage, PRs, heart rates, all a part of the daily running routine. In honor of the numbers, I submit 70, 75, 70, 74, 73: the mileage for the last five weeks.

I separate Runner Rich from Jogger Rich when my mileage gets into the 50’s and 60’s. Once the 70 threshold is crossed, I become Serious Rich. For others the numbers are completely different and they were much different for me forty years ago. But for now, at the ripe young age of 63, I’ll take five straight weeks of more than ten miles a day and take it with a smidgeon of pride. Mostly, it means not sick, not injured, probably losing weight, highly motivated.

This week opened with a few runs at home and then OFF TO SEA LEVEL! I love the occasional journey to sea level (this time North of the Bay in Vallejo and Benicia) as I get to experience how the people who can breathe easily get to do it. Normally if I hit the GPS switch on my watch during an easy run (which does not happen very often), I’ll see 10-10:30 pace. On Wednesday afternoon’s run to the Benicia State Park, I casually glanced down and captured a look at 9:10 pace and could not hear myself breathe.

“I LIKE oxygen,” I said to no one in particular. And so the O week began.

The highlight of O week, thus far, was Friday. Based on the suggestion of my Brother-in-law, Blane, I headed for the hills. He said, “You might want to try Annadel State Park. It’s a runners paradise. 5000 acres. Redwood and Oak forests. Plenty of climbing.” So, I met him at the Annadel State Park in Santa Rosa. He was right on all counts.

Blane rode his mountain bike, I ran. There were sections that were open wide trails, smooth as they could be, and sections that were downright CRAGGY (my favorite trail word), and everything in between. Lots of rocks, lots of hills, 1700 feet of climbing. Mostly, there was oxygen. The four mile climb just past the midpoint, while I would not say I smoked it, I ran it well and never spent time struggling for air. “I LIKE oxygen,” I said to four deer. 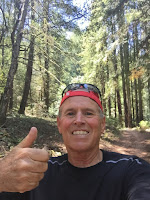 The hills were fun, the scenery was wonderful and a good time was had by all (or at least by me). In all, just a hair under fourteen miles, run comfortably.

Upon arriving back at the ranch, I decided to throw in another five miles so that Linda wouldn’t have to run alone. Nineteen for the day. Not too shabby. AND…… it convinced me of two things: 1) that it is here, in the Bay area, where I will tackle my first Ultra Marathon later this year. More on that another time, and 2) I LIKE oxygen.

The numbers look good. I’m loving my runs. And three more days to soak up the O!