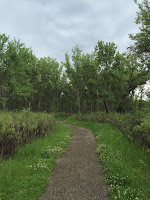 Somehow I ran 50 miles this week. I’m not completely sure how. After the ladder incident (I guess falling off of a ladder counts as an incident) and then moving boxes, furniture and everything for my Brother, there wasn’t a single day in which I didn’t feel injured. Nonetheless, it is complete.

The only real highlight was Thursday. I meant to run an easy four in the Cherry Creek State Park, but somehow, just kept going.
It was one of those runs where you (I) just get in a zone, of sorts. I never felt awesome, never felt lousy. For the most part, I don’t remember feeling. I just ran. Before I knew it, I was entering the woods. Once there, I never pass up the chance to play with the several loops contained within.
The woods in the Cherry Creek State Park are the closest thing to a real escape from the urban jungle that currently is (and probably forever will be), the Denver Metro area. There is really only three and a half trails, a total of maybe three miles, but I could just keep going and going once I enter.
Sometimes there are hikers, walkers and the occasional runner. More often than not, I am alone winding my way around the wooded path of seclusion. I absolutely love it. The run, by the way, ended up being ten miles. In my log, I called it “cleansing.”
I suppose the other highlight of the week was right at the beginning: on Monday, I got into the Imogene Pass Run in September. Registration opened at 6 am (no sweat for me as I RARELY sleep past 5:30). Last year it sold out in 58 minutes, so I was ready. Others complained online (mostly on the race’s Facebook page), about terrible experiences, 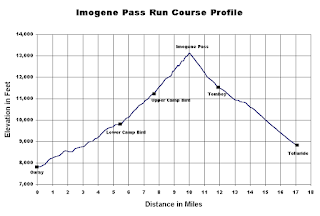 I’ve had a plethora of friends run Imogene, but I never have. It’s 17+ miles from Ouray (7811 feet altitude) to Telluride (8820′) over Imogene Pass (13,114′). You could call it a bucket list thing. Mostly I just got the Imogene bug and it spread to actual registration. Hopefully that bug will spread to completion. Preparation will include lots of miles, bunches of hills and some peak running, probably commencing this weekend with Bear Peak near Boulder.
So that’s it. Looking for a healthy, happy 62-65 mile week. We’ll see you on the other side,
Run on.