On this morning’s run, I saw someone.

No, no one famous. No one I even knew. I just saw someone. And that someone was the first person I had seen running in the Cherry Creek State Park in five days. It’s been cold. In fact, today was the first 0+ run out of the last four. It was 20 (we’re havin’ a heat waaaaave!).

Today, obviously, marked run number one of 2015, the new year. It was a five miler in the snow. That followed yesterday’s five miler which brought the total for 2014 to 2289.

Speaking of snow, I am LOVING my snow gripper spring thingys my son Ryan gave me for Christmas. Very grippy and after a bad slip and fall last year, they have raised my confidence level on these last snowy days.

Back to the year. I did not race a single time in 2014 and went on very few long runs (15+ is a long run in my world). I meant to, it just never quite happened. Well, there’s always next year. Right?

Ah, next year. The goals for 2015 are 1) to run as many days as possible. I am not super big into streaks (although currently haven’t missed a day of at least 3 miles since May 13 – that’s

232 days) but a good streak is a reflection of being injury free and without sickness. 2) to run a freakin’ marathon. I’m really shooting for a pair, here. I’ve run 17 so far and would love to begin pushing that number so that someday I hit 50. 3) to run a trail Ultra. I figure the intro distance is going to be 50K. 4) I want to hit the trails; mountains, seaside, plains – mostly in the mountains. There is a serenity and beauty of trail running that can convert the average run into an above average experience. 5) MOSTLY, I want it to be fun again. While I love my runs (in a strange way), 2014 was a year of little or no motivation for the individual run. I know it is not possible to embrace every run with the wide-eyed enthusiasm of a new convert, but I’d at least like to return to the days of the easy, semi-fast, fun runs. 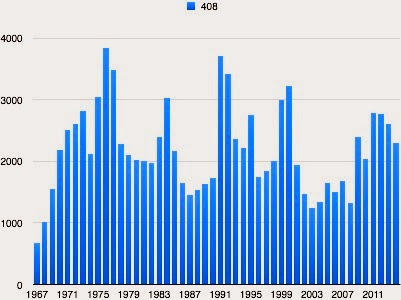 So, 2014 is in the books. I like closing out the year’s log. I’ve been doing it for a long time. As has been previously noted herein (whoa, herein), I have been logging miles since I began this wonderful activity of running back in August of 1966. So, this log was number 49. In 49 years, we’ve logged 105,465 miles. That’s 169,729 kilometers, 44% of the way to the moon, 4 and a quarter times around the equator and back and forth across the US about 19 times (take THAT Forrest Gump!).

At this point, I’m sure I could say many things, I will say only this: this incredible act of placing one foot in front of the other has been the cornerstone of my life. It has gotten me through the toughest of times, shared in the most joyous moments, been a reference point for how everything else is going and provided for billions of thoughts, emotions and perceptions. It is my anchor.

I want to do it forever.