Validation: In The High Country 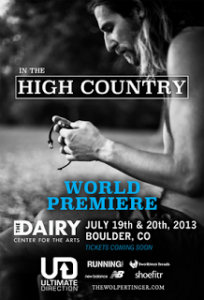 It wasn’t that I felt the need, after viewing In The High Country, to walk up to Anton Krupicka or Joel Wolpert and utter the words, “You complete me.” I didn’t need completing. In fact, I didn’t need anything. But, I felt something. Something familiar.

I’d spent thirty minutes at The Boulder Running Company, had been to Marshall’s and had even grabbed a bite to eat. Still, I was over a half an hour early and the first to be seated at The Dairy Center For The Arts for day two of the movie’s world premiere. Quickly scanning for the perfect location, I pondered row two, but opted for the third, smack dab in the middle.

What followed was a parade of interested runners, enthusiasts, hipsters and hipster runner enthusiasts. Compared to me, they all looked hipper and more like runners. None were more enthusiastic.

Lately, the trails have been calling me. After pretty much missing four weeks with a nasty foot injury, I returned to running with a very simple goal: to run. I had races on the schedule and had lost valuable preparation time, but that didn’t really matter. I just wanted to run again. In my desperation to feel like a runner during this downtime, I devoured every running publication known to mankind, watched youtube and flotrack videos, and read the blogs of those engaging in that activity I was missing. I bought the movie Unbreakable about the Western States 100 (fantastic), and learned about the Nolan’s 14    (https://www.youtube.com/watch?v=a4S7k13mUlM). Then….. about five weeks ago, I could run without foot pain. Yay!

I recovered pretty well, if I do say so myself. I ran 4 miles a day the first few days and then dove in beginning the buildup for my Marine Corps Marathon date in October. The eighteen week plan commenced. In the last four weeks I have logged 47, 55, 60, 78 miles. Happily, I am right on schedule with fourteen weeks to go. Interestingly though, I don’t actually care. I’m not, although I believe this to be a fluid thing, overly caught up in one race, track workouts or timed miles. I’m just loving running.

Last fall in the 100,000 mile report (http://runspittle.blogspot.com/2012/10/the-100000-mile-report.html), I wrote, “Running was/is a simple activity, cyclical in its nature. One foot placed in front of the next in order to move forward: to cover ground, to open my mind, to allow me opportunities to escape my troubles or celebrate my triumphs. Mostly, to connect me to and strengthen my relationship with this planet upon which I exist. For that, I am ecstatically, humbly grateful.”

It’s been challenging at times to explain this “connection with my planet thing” to my own fellow runners, let alone civilians. But finally, sitting in row three at The Dairy Center for the Arts, I found someone who understands. Joel Wolpert produced a film that touched the topic of running in a unique way, a familiar way. Early in the film, Tony Krupicka says (and I know this isn’t an exact quote), “Running defines the landscape. The landscape defines our home. Our home defines us.” (Wish I’d have written it down right that moment.) Nonetheless, I get/got it. And it’s what I’ve always believed. Running is an act that, for me, is the essence of being alive. I am living, breathing, connecting and exploring my limits every single day when I strap on the shoes and hit the earth. It is an act that is, all at once; effort and relaxation, pain and joy, hunger and fulfillment. Geez, I love running.

And yes, I guess, while it may not complete me, it sure did validate me. Thanks Joel and thanks Tony for an incredible movie.