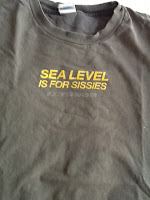 That’s what the Bolder Boulder t-shirts have proclaimed. “Sea level is for sissies.” If that is true, then I spent seven glorious days as the biggest sissy you can possibly imagine. AND….. I liked it.

Don’t get me wrong, part of the reason I enjoy sea level as much as I do is living at 5700 feet. I love coming down and breathing that plentiful air, cruising up hills and basically shaking it out a little without the curse of oxygen debt. So when the opportunity to spend a week in Vallejo, CA, arrived, I was excited.

My Mother-in-Law lives six miles from the south entrance to the Benecia State Park. That, pretty much, was the morning routine. Six miles to the park (a net downhill with three MONSTER uphills on the way), then usually the out and back five.

My first two days in the land of “O,” were spent running easy (easy, translated for me, meant 9:10 – 9:30 ish per mile, HR average around 125). Just getting my sea (level) legs. On day three, I decided to mix in some two minute pick-ups in the park. 9 X 2 minutes with a 30 second rest jog at 7:20 pace. The first two felt robotic and a little stiff, but once loosened, my body took rather kindly to these repeats and felt good.

Day four was spent on a bucket list run: the Muir Woods, Dipsea trail and Mt Tamalpais. Ever since Bruce Dern took me to “the mountain” in the movie “On The Edge,” I have longed to hit those trails. What a blast!

The run began on the Dipsea trail near the Muir Woods Park entrance. I spent roughly the first three miles or so climbing taking a few wrong turns every now and then. Ultimately I found myself heading downward with only a mile to Stinson Beach. This, I figured, would not do. I was far from finished climbing. There was still that peak up there hovering over me as if we were in some kind of stare-down contest. So rather than complete the downhill journey, I decided to find my way to the West Peak of Mt. Tam.

The trails varied from smooth to very rocky; from uphill to screaming uphill. A few times, in the woods, you could have convinced me I was facedown on a brand new deck, the redwood smell was so strong. I also found it amazing how sparsely the trail was populated. I think in the two hours I climbed, I might have seen eight other people and NO ONE else running. Once at the top, I decided to head down (can’t believe my helicopter pilot, Jeeves never showed). Reminiscent of my one time experience at the Pikes Peak Marathon, going down was not nearly as much fun as I thought it would be.

All in all, I logged 13 miles in about three hours and 12 minutes and loved pretty much every bit of it. Check that one off.

Day five was a simple, but extremely hilly run all over. I thought I’d be considerably sorer than I was but I still ran easy. The plan for the rest of the day was canoeing on the Russian River, so strength had to be conserved.

Day six was an easy ten miles with a few thrown in the middle right around 7:50-8:00 pace. These three miles clicked off nicely and I spent most of the time wishing that pace was that easy at home. The afternoon of day six was spent on Angel Island . Yikes! I didn’t even know this place existed! I only had the time for an easy PM three miles but vowed that I would return someday for a twenty miler on the 5 mile perimeter road. Everyone in our group raved about the views and I could only see the place as a great spot to run (of course, none of you can relate to that, right?).

My final run (day seven) would be a 14 miler with no watch, no heart rate monitor. Just a celebration of sorts for oxygen and its wonderful power. All told, I logged 82 miles in my seven days and arrived home feeling pretty good about myself. Upon arrival, however, I was faced with the trifecta (for me) from hell: an end of the day run, after a meal, and back at altitude.

The Savannah Rock n Roll is a little more than nine weeks away which is the halfway point of my eighteen week plan. I am liking my progress. I’ve averaged 76 miles a week over the nine weeks and lost 25 pounds in the process. Still have 20 to go to be at Flying Pig, year 2000, weight (I ran 3:10:34 that day).

Long run tomorrow. Park to Park ten mile race on Labor Day and a track session thrown in for the joy of it. Life is good.