The Runoff and Being Fifteen

After three easy miles in the neighborhood, it was time to bid my lovely bride a fond farewell. She would be turning left and heading home to prep herself for the coming workday and I would be off to run my way through another seven on what I affectionately call The Park Loop.
The Park Loop is my fallback seven mile loop specifically for the days when I just want to run. No thought required, no trailblazing. Merely a simple loop that takes me through the East end of the Cherry Creek State Park. A very nice descent marks the first mile and a quarter into the park. From there it’s mostly flat until I climb my way out at the end (not as far coming out, but steeper).
The Park loop can become a longer run if I decide to head into The Woods. The Woods is a gorgeous section of the CCSP with several winding circuits that connect to a plethora of other possibilities. The Woods can add anywhere from a mile to four or five according to how they are traversed. I LOVE the Woods. It’s one of my top five places to run anywhere.
As I made my right turn to begin the next seven, Linda said, “Are you running in the Woods?”
“I don’t know,” I answered, “it depends on the storm.”
Ah, the storm. Last night the area 20-40 miles Southeast of Denver got SLAMMED with a severe thunderstorm. While certainly not atypical for June, this one was one of the noisiest ever. Big wind, hail, thunder and lightening: the whole package. The damage was clear during the neighborhood part of the run. Many trees were smacked big-time and a bit of roof damage could be easily spotted.
My descent was uneventful (except that I felt pretty darned flowie, if you know what I mean). Once in the park, I crossed the main park road and decided that, Yes, I would head to the woods. As I entered the trail, a man was coming from within. He said nothing (well, maybe the usual “HI”) and looked perfectly normal. A mere fifty yards later, everything changed. The water appeared, The Runoff had hit. I wondered if he was laughing fifty yards behind me.
I know this trail like the back of my hand. If it were flooded at this spot, it would only get worse as many of these interior trails are also water spillways during floods. Not even halfway into my run, I decided to stay dry and return to the road. Little did I know that there was no escape. The Runoff was everywhere!
Having returned to the familiarity and safeness of the road, it took less than a tenth of a mile and one curve in the road for me to see the Cherry Creek River aside the road. The only problem with this sighting was this: there is no Cherry Creek River that runs along the side of the road. Yesterday, that whole “wetland” area was dry as a bone.
Undaunted, I pressed on figuring I could take the road past the Ranger entrance and connect with the bike path. This was basically my regular route anyway and very little of it was low lying, and therefore at risk. Or so I thought.
Upon reaching the entrance to the picnic area, the road was closed. The sign, as you can see, told the tale. NO MOTORIZED TRAFFIC BEYOND THIS POINT. Well, I’ve got news: if they think that Mr. Non-Motorized was treading through that, they’re nuts. These are two week old shoes, still look new and I have a long way to go. (a side note: at this point I remember last night’s Emergency Alert System warning on Comcast. The male computer voice is warning of the dangers of flash flooding and driving into water filled underpasses of unknown depth. He says “turn around, don’t drown”). I’ve decided that’s good advice.
I turn left and head to higher ground. I decide I’ll traverse the top edges of the dog park area of the state park. While I’m pretty sure there are some wet spots, I’m thinking that with my familiarity with these paths, I can avoid the shoe soaker. The trail is a hair wet, but not bad. Below, I could see some high school runner boys running and splashing along a low lying trail. “Must be nice to be fifteen,” I thought. “I’ll choose dry!” I hop a few bad spots but at the same time I’m also thinking I’ve got it made. I will finish off the loop, still get in the seven + three, and emerge dry as a bone. That plan looked good…. for a while.
I could have avoided the water ahead if I had only veered to the left and did the quick jaunt through what I call the bushes. But this main trail should have taken me to the bike path and I should have been home free with only two miles to go. I carefully tip-toed along the ridge, staying, oh so dry, when all of a sudden dryness gave way to wrath of The Runoff. Two choices emerged: backtrack a half a mile and cut through the bushes OR trudge ahead. The voice in my head says “turn around, don’t drown.” 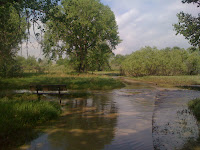 No, not this time. No computer voice will tell me where I can and cannot run. I’m heading in (cover me, boys). Ankle deep soon became shin deep as I trudged on my quest to reach the dryness and purity of the bike path. My sparkling new shoes? Well, I could no longer see them, they might have even been gone, for all I know.
Then, it dawned on me. This water, this Runoff from last night’s storm, was coming straight down, you guessed it, the Bike Path. All bets were off at this point. With route calculation a thing of the past (and dryness too), I gave in to The Runoff. My mind quickly transformed and I became, well, fifteen!
My frolicking lasted only about 200 yards, but it was a glorious, splashy, giggly 200 yards. Two ladies, on a walk and about to enter the treacherous rapids gave me an odd look and retreated (“turn around, don’t drown”). Oh well, their loss.
I hit the last puddle with a mile and a half to go. At this point, as many of you have experienced, there is no decision to be made. It is full on, right through, splash it up! And then, it was over. The great Runoff run of 2012 was finished. The climb out of the park to my home on the hill would be the usual slow trudging with one exception: squishy shoes.

And just squishy enough to make me giggle. Fifteen is not so bad, in moderation. And hey, my shoes will dry just in time for tomorrow.