The Ecstasy of the Trials – Oly Trials Day 5

For a distance racing fan, Day 5 of the Trials was a plethora of races reflecting the many faces of the Olympic Trials: from the Ridiculous to the Agony, to the Ecstasy. One by one….
The Ridiculous. Yeah I know that the plan is to emulate the Olympic Games as much as possible. I get that. But WOW, three prelim heats to eliminate 3 women and six men. Seems like a waste. Nonetheless, no surprises in either group. Everyone through to the semis.
The Agony. There is no contest for this, Julia Lucas. After taking the lead with a little over three laps to go, Lucas pressed the pace, brought the race back into Olympic “A” standard territory and opened a sizable gap to her competitors. That gap looked safe until the last 200 when first Molly Huddle and Julie Culley went by. At this point, Lucas was STRUGGLING. She had the bear AND the piano on her back. She pressed on wishing that somehow that finish line would come closer. Her Olympic dream, however, was shattered when Kim Conley nipped her at the tape with a lean that would have been the envy of a world class sprinter. 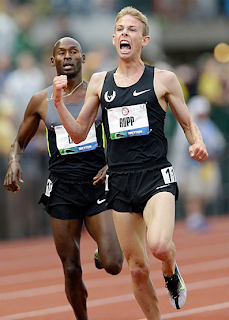 The Ecstasy. There is two: Galen Rupp and Kim Conley. Galen Rupp has arrived…. period. The young former Oregon Duck unleashed a deadly kick with 400 to go, only to be passed by the great Bernard Lagat (quite a kicker, himself). Normally, in most races, that’s it. Put a fork in him, he’s done. Not Galen Rupp. Somehow, and from somewhere, he found yet another gear and arose from the ashes of defeat (well, being second – hey, just trying to create a little drama, here) to whip Lagat in the final 50 meters. Through his outstanding victories in both the 5 and 10 K races, the often criticized Rupp has firmly established himself as America’s premier distance runner. 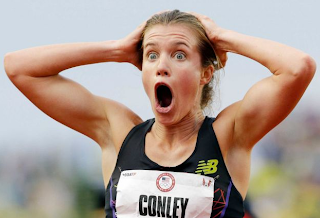 Kim Conley, on the other hand, has not been in most anyone’s discussions as America’s premier female distance runner. Unleashing a deadly kick the final 200, Conley sealed the deal with an awesome lean at the tape. She was third, BUT…. did she meet the Olympic “A” standard? A few seconds of anticipation (that must have seemed like days) passed before the scoreboard flashed her time, two tenths of a second under the standard. Her shock/ecstasy can be seen in the picture above. At some point, she’ll want to thank Julia Lucas for upping the pace. Great Oly Trials drama!
ALSO: a shoutout to Evan Jager who ran a personal best of 8:17 to win the 3000m Steeplechase…… in his FOURTH ever steeple. Amazing. Jager, an amazing talent, should improve greatly, even in the five/six weeks until the Olympics. Of course, he’ll have to as the steeple has been pretty much the private domain of the Kenyans. To compete, Jager needs to definitely go sub 8:10. I’m betting he does it, but still won’t medal.

So another great day of Track and Field. Geez, this sure beats watching baseball this time of year!