The Long Run to Nowhere! 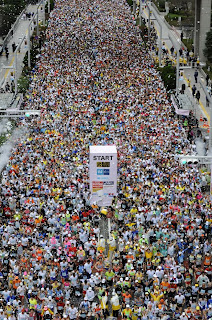 Yesterday’s 21 mile run had some interesting little footnotes attached. Outside of the Napa Valley Marathon, it was the longest run of the year. Normally, I’m more than happy enough between 18-20 miles for my long run, but today’s course had to be either 17 or 21. I opted for the longer run.
The other added attractions for the run were as follows: It brought my total for the year to 2039. In the whole of 2010, I ran 2031, so I have equaled that total with over three months to go. Next it finished my week at 76 miles, the most of any week during this year. Finally, it was the run that boosted my “haven’t missed a day” streak to 365 days. All nice things.
The run itself was mostly uneventful. The first couple of miles are the hilliest so they were covered in the 10:20-35 range (trying to keep my heart rate under control). The next few were semi-catchup miles, drooping down to the low 9:50s while at the same time being VERY under control.The mid miles were right around 10 minutes with 13-17 in the 9:30’s. After 17, my wife Linda joined me so we ran just under eleven minute pace for the final 4 miles. All in all, the average per mile was right at 10 minutes with an average HR of 142. Both citing an easy, relaxed run.
I certainly won’t complain. I had some hip flexor stiffness through most of the run, but recovered well and was only a tiny bit sore this morning for a shakeout six.

I train on despite the fact that the goal of aiming this towards a specific race is temporarily on hold. A few weeks ago when I went to register for the Savannah Marathon, I found it full. Sooooo, I’m actively searching for a suitable replacement. At this time, I think I have it narrowed down to Cal International or Tucson (both in December). In the meantime, train on, right?

By the way, I always love awaking to an international marathon (this time Berlin) on my computer as I ready myself for the days run. Great runs by Patrick Makau (2:03:38 is REALLY fast) and Florence Kiplagat for the victories. Also a shout out to the great Paula Radcliffe, back and looking good!