My Name Is Rich and I Am Injured! 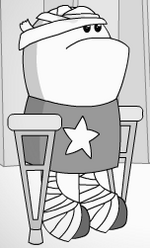 There. I said it. I realize that Step One is admitting I have a problem. Done. Check!
It began back in February on a long hilly 20 miler as I noticed some discomfort in my right hip flexor. As per usual, I figured it was just a product of a twenty mile run by a heavy old man. In the following month it went from bad to tolerable and while present, was not an issue at the Napa Valley Marathon in March.
The post marathon recovery was pleasant but the discomfort lingered. It never got so bad as to warrant the canceling of a workout, but never got better enough for increased mileage and hill work.
In the olden days, this would be a minor inconvenience and a day or two of easy running would cure it with no sweat. It was easier then. As Bob Seger sang, “I was living to run and running to live. Never worried about paying or even how much I owed.” These days debts linger if not completely paid in full.
So now, several months later, I’m tired of it and looking at the year ahead it’s either time to take care of this annoyance or sacrifice several goals. I’m not good at sacrificing my goals, so I have decided to back WAY off and succumb to some treatment. You’d think that after almost 45 years of running and 35 years of coaching, I would have handled this a long time ago. Do as I say, not as I do, right?
After consultation with my medical team, I have adopted a combination of ice (I hate icing), moist heat and light stretching and have sworn to run no more than 4 miles at no faster than 11 minute pace until the pain has been gone for five consecutive days. I have also promised that if the treatment has not delivered a pain free hip flexor in a reasonable amount of time, I will stop running and give in to a more serious protocol (missing days is serious all by itself, as one of the goals this year was to run every day – continuing the streak from the last quarter of 2010).
Step Two is giving in to a higher power. I am about to do that right now. There is a bag of frozen corn that has my name on it. Either that or it’s calling me names.

So far so good.