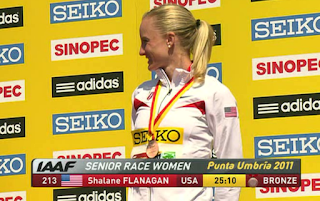 Talk about March Madness! Basketball? Oh no, never saw a dribble or a dunk Sunday.
It’s 5:30 am. I’m wide awake and glued to the New York Road Runners live video stream of the NYC Half Marathon. Great races on both sides of the gender world. Galen Rupp and Mo Farah dueling with Gebre Gebremariam down the riverfront of New York. Kara Goucher taking on the Kenyan women. Kara placed third in 1:09:02 and looks like she may be a contender in Boston next month. Galen Rupp was also quite impressive (I have a feeling we might be seeing him at the Olympic Marathon Trials in Houston… just a feeling).
The streaming coverage by the New York Road Runners was awesome, the commentating was also pretty good and the entire viewing was fun and a nice way to begin a day. Also LOVE Carrie Tolefson’s specials, The Daily Cooldown.
THEN…. somehow, I found the Universal Sports link to Punta Umbria, Spain and the World Cross Country Championships. As per the norm, the Kenyans and Ethiopians dominated. Right in the middle of it all, however, is Shalane Flanagan hammering away and ultimately taking the Bronze medal in what is widely regarded as “the toughest race in the world to win.” In short, Shalane was awesome!!! She never let the pack drop her until the final move near the end. And with some great pack running by Magda, Molly and Blake, the American Women capture Bronze as well.
By the time I completed the Men’s and Women’s races, the Los Angeles Marathon was on. What happened to “it never rains in California?” Yikes, there were times when I actually felt bad for the runners (and I LOVE running in the rain). The highlight in LA was the marathon debut of Amy Hastings. Placing second in 2:27:03, she paced the Ethiopian girls through the rain and came back to the lead after being dropped, no less than three times. She was SO TOUGH!!! Amy has to taken seriously for the Olympic Marathon Trials.
I followed my running voyeurism, with a pretty good nine miles of running, myself. Felt easy, smooth and it was a fitting end to a fabulous morning.

All in all, it was a great day for American Women’s distance running and not a bad way to spend a Sunday. Especially considering it was the peak of March Madness!!!