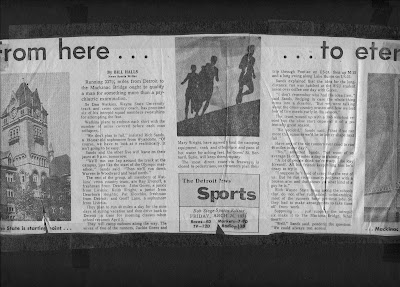 Sgt Pepper may have taught the band to play 20 years ago, but if you double that you’ll find an event of greater significance (at least for me). It was forty years ago: March 27, 1971 that six daring youths from Wayne State University set out to run from the campus in downtown Detroit to the Mackinac Bridge, what we charted as being 337 miles.
What began as a goofy chat in the student union between John Gores and myself, slowly became a reality for us and the four others we “recruited,” Geoff Lane, Ray Evanoff, Pat Klotchko and Keith Wright. The plan was to run for eight days (Spring Break), camp as we went and roll into Mackinac fresh as daisies (we were young and didn’t know any better). The hope was to be able to run across the bridge upon completion (even though pedestrians were prohibited from crossing the bridge except for the annual Labor Day walk).
Day one had us looping the track one time (like the Olympic Marathon) heading through campus and on to Woodward Avenue and North. Our goal was to chop up our days into three runs, stay together when possible and steadily make our way to the Bridge.
Keeping in mind that it’s been forty years, I have forgotten a great deal about the details of the run. Some things, however, are as clear as if they happened yesterday. I would like to share some of those.
On Woodward Avenue, we were intercepted by a news truck. The reporter, who for some reason I think had the last name of Berry, hopped out and being the typical man-on-the-street-story-kind-of-guy, ran alongside as he interviewed us for the nightly news. Unfortunately for him, Mr. Berry (?) was a rather portly fellow thus limiting the length of our 15 minutes of fame.
Once outside the city limits, the loneliness of the long distance runners set in and the task at hand became more apparent. It was going to be a long way!
We camped that first night. I couldn’t tell you where although I think it was somewhere near Ortonville. My Uncle Dave lived near there. We didn’t visit. The setup was pretty simple. John Gores’ wife, Jackie and Keith Wright’s wife, Mary, were our support system. They dropped us off, picked us up, cooked for us, supported us but mostly put up with their men and these other guys as we routinely going between bouts of trauma and downright silliness.
On Day two we made an alteration of the route. Instead of hanging a right in Standish and following US 23 along the Lake Huron shoreline, we decided to pierce the middle of the Michigan mitten and continue up Hwy 33. In each of the first days we ran about 40-45 miles a day.
Day three had three distinct memories. 1) We lost Keith Wright to an ankle injury (which means we also lost Mary). I have to say that when Keith went down, it was the low point of the journey. Keith was the eternal optimist and always pleasant as someone with whom to share a running conversation. 2) It was our longest day – 52 miles. Small country roads with snow packed on the side. An occasional horn honking supporter passing by. I remember feeling fairly okay that day and John and I finished in beautiful Alger, Michigan before the others. We sat in front of the Alger Post Office, chatting away, munching on peanut butter and jelly sandwiches. John and I could always chat (as well as sing Rocky Raccoon until silenced by unappreciative and tone deaf teammates). In fact, I suppose it was our chatting that got us into this mess! 3) We decided we were done camping. 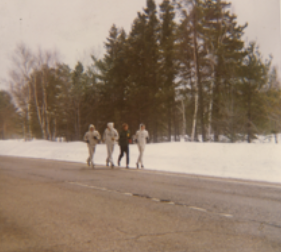 As we headed further north, we were close enough to Harrisville, Michigan (and the cabin belonging to Geoff Lane’s parents) to head for a night or two of non-camping warmth. We never camped again.
Mornings were odd. We were young and somewhat full of that energy exclusively given to athletes in our age group. At the same time, the wear and tear of the journey was taking its toll. Each morning, I would take inventory: calves okay, hamstrings still kind of loose, quads alright. We’d even say to each other, “hey I feel pretty good.” “Yeah, me too.”…. then, we’d actually stand up… OUCH!
Days four, five and six were long. The roads were lonely (part of the reason for the route change was fewer cars and trucks) and everyone was hurting to some extent.
John Gores was the trooper. He was the one who kept us going, stayed optimistic. John’s biggest problem was that he seemed to attract hostile dogs. I can’t tell you how much we used to gripe about our crappy, baggy WSU sweat pants. The griping ceased when it was the pants bagginess that saved John’s leg one day as some hungry country dog could only get a mouth full of cotton instead of calf. 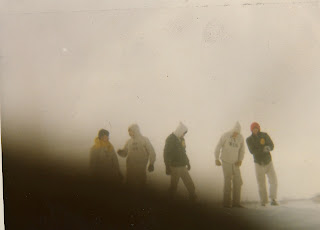 Jackie was a saint. How she ever put up with the bunch of us was beyond me, but she did.  Geoff Lane was our result oriented guy. He had a work ethic as a runner and as a person that was one of the best I’ve ever known. He was also strong and fast. Ray Evanoff and Pat Klotchko had the toughest time. Pat was hurting most of the way but always good for a witty comment about the days events and Ray, a converted 880 runner, got pretty sick near the end. We were a ragtag group, but one united by a goofy spring break idea.
Somehow we became the story for a Detroit News reporter named Bill Halls. I would call my Dad, tell him where we were, he would call Bill. My Dad relished this role as news source and Detroit News insider. All in all, Mr. Halls did a nice job covering our little jaunt.
We spent three nights at Geoff’s cabin. I’m not sure we’d have made it if we hadn’t made that move. It meant driving early to get to our starting points and driving back to sleep at night, but the extra comfort was more than worth it. Besides, the cabin became a home of sort. 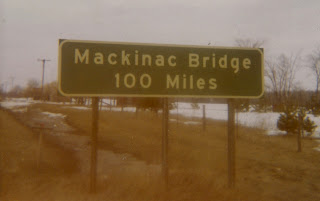 Near the end of Day Six we saw the sign that said “Mackinac Bridge 100 miles.” 100 miles is a long way, even in a car. This sign, however, was a sign of hope.
As you can imagine, there was some rough weather along the way. It was Michigan in March after all. For the most part it wasn’t too bad. I only remember being REALLY cold in Onaway, where we spent night seven. John’s wife, Jackie, was related to the Young family (uncle and aunt, maybe) and they were our hosts prior to the runs final day. 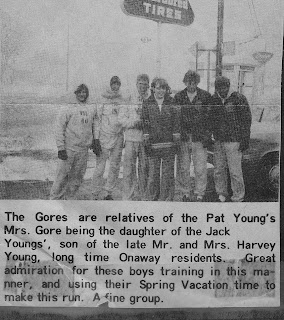 On the last day, our coach Dan Watkins, showed up. While not the biggest supporter of our run (it WAS going to bang up most of his distance crew prior to the outdoor season), his job was to do two things (at least as far as we were concerned): get us a hotel room once we were done and arrange it so we could cross the bridge. The man to convince was Henry Debereaux, the bridge supervisor. I don’t know how the negotiations went. What I do know was that they were not thrilled to have a bunch of college kids run the five miles across their bridge. Especially when the blizzard started.

It was snowing like crazy when we arrived at the Big Mac. Henry let us go anyway. Of course we had talked the tough talk about how they couldn’t stop us or they’d have to arrest us, shoot us or worse. Mostly, we’d have been pretty devastated had we not gotten to run the bridge. But run the bridge we did!  The sun actually came out for a bit near the top and at the end. It may have been the best five miles of the run. 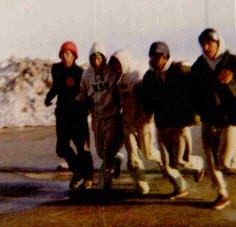 We locked arms at the finish. Sat down when done and laughed, cried and everything in between. We went out to eat that night (no one being happier about that than Jackie), stayed in a motel and returned home the next day. Just in time to start the Spring Quarter on Monday. A Detroit bowling alley owner donated trophies to mark our accomplishment (I still have mine) and Coach Watkins popped for some Detroit to Mackinac T Shirts (long gone from being worn a bunch). 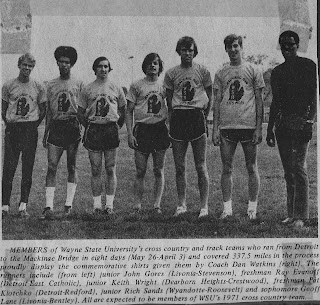 I look back on the run and am pretty amazed we pulled it off, if for no other reason than logistics. All in all, we ran roughly 343 miles (sorry, Garmin hadn’t blessed us with the Forerunner back then). In the big scheme of the world or even the Wayne State campus, it was barely a blip on the radar screen. But to quote the Wayne State student newspaper the South End, “All the efforts got them was blisters on their feet and a sweatshirt from their coach indicating the number of miles they ran on the front. I imagine, however, that their self-satisfaction has reached a level few other people know.” Well said. 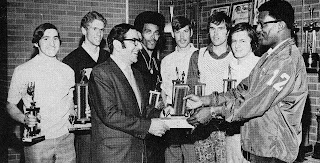 I salute you gentlemen (and lady) on the 40th anniversary of our endeavor! A wonderful memory. Thanks.