Waiting for Joannie a Ninth Time… 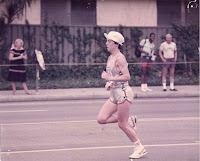 It was around 26 and a half years ago that Joan Benoit (now Benoit Samuelson) won the first Women’s Olympic Marathon. I’m proud to say I was there: and there, and there, and over there, and several other places too. Finally, for the first time ever, I am hoping to meet Joannie at the Napa Valley Marathon next weekend. She’ll be at the Expo.
We took the road trip to Los Angeles, my ex-wife Della and my sons Matt and Ryan (who was only 5 months old at the time), to get a glimpse of the Olympics “up close and personal.” Tickets were fairly easy to pruchase. We saw Carl Lewis and Edwin Moses in some preliminary action and my friend Pat Porter run in the 10,000 meters. The highlight, however, was outside of the stadium and completely free; the Marathon.

After anal retentively mapping the route with Della’s brother Doug, we embarked on the journey from Santa Monica to the Coliseum.  Now, I’m not the bragging kind, but I will tell you proudly that we saw Joannie run by 8 times over the 26.2 mile marathon course. If anyone in L.A. saw her more, it was from the press truck or on television. We were there near the start. We were there shortly after she broke away, looking back at the pack as if to ask, “aren’t any of you coming?” They didn’t. Each time we found Joannie her lead was extended. It was incredibly inspiring.
We took a few pictures that day. Some survived, some didn’t. The one at the beginning of this article shows Joannie the way I remember her that day: running alone, and completely focused. Of the pictures I took, this was the one we had enlarged and this is the one I hope she will sign for me.

It’s been a long time since the last eight times I saw you, Joannie, but I’m almost there. Just a few more days….