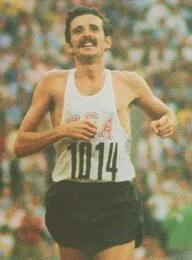 Some time ago, it was Pre Week and as Pre was kind of a hero, I spent a little time recalling some others, namely Jim Ryun, Al Ruffner, assorted college studs and Jack Bachelor. http://runspittle.blogspot.com/2011/01/heroes-havent-always-been-cowboys.html I couldn’t possibly remember heroes without recalling a biggie in my running life: Frank Shorter. I have four Shorter memories (and a few longer ones – pun intended …).

First memory is sitting in a bar in Harrisville, Michigan with collegiate teammates watching Frank win the 1972 Olympic Men’s Marathon. It was the first Olympic marathon television coverage of any significant length and got us pretty psyched to see an American come through. Afterward, I remember someone asking him what his secret was (we all want to know the secret) and he said that his secret was running 20 miles a day for the past few years. Perfect.
Number two was semi-mentioned in the previous PreWeek blog. In the Florida Relays six mile, Frank was doing all of the pacing work with Neil Cusack (of Ireland) sitting in tow. Several times, Frank would move out on the back straight and urge Cusack to come forward and share in the pacing work…. nothing.  Finally, a bit irritated, Frank began throwing in surges and placed his rival in some serious oxygen debt. Race over. Frank played around the rest of the race picking up the straights and cruising the curves.
Memory number three occurred a few years later when a friend of mine, Brad Kingery, called and asked what my ex wife Della and I were doing one weekend. Nothing much, I answered, what do you have in mind? Well Frank Shorter is opening his store in East Lansing and could use some help opening boxes, setting up and getting it ready. DONE! While it was fun helping at the store, the best part was running in a nearby six mile race the next day. The one mile mark passed in a big pack with Frank, Stan Mavis, Herb Lindsey, Steve Flanagan and others a little under 4:50. The pace kept up a bit longer until Frank looked around and said, “C’mon let’s get outa here.” Then, BOOM, they were gone. Never saw them again and I ran in the low 32’s that day. I remember being in absolute shock, they made it look SOOOOO easy!
Final memory came almost eleven years ago. My friend Eda and I were on the nine mile loop of the Sunday Boulder Road Runners run. The loop did an out and back on Pleasant Ridge just off of 47th Street. The turnaround was in front of Frank’s house. Some days, his daughter would set up a water/lemonade stand. On this particular day, we stood and chatted with a while. We mostly yacked about training and at some point in the conversation, Frank said to me, in his sweet, blunt way, “For as much as you run, you’d think you’d be lighter.” Ouch! Truth hurt and yes, Eda reminded me of this many more times.

Many say that Frank Shorter invented running in this country. His Olympic victory certainly was a major factor in the first running boom. Few ever worked harder and more methodically to achieve the highest honors in their sport. He was/is one of the best commentators in the business. More than that, Frank Shorter could be looked up to for his tremendous work ethic, leadership in the sport of running and tremendous accomplishments. Thanks, Frank for being one of my running heroes!