Well, it happened. I got chicked today during my run.  I was deep in thought cruising through the middle miles of a five mile recovery run and WHOOSH – she flew by! I’ve seen her before on the trail; lean, fast, usually sporting a top from the most recent triathlon. I should be outraged, embarrassed and hell-bent on revenge. Then there is d) none of the above.
For a guy (or dude), getting chicked usually refers to being passed by someone of the female persuasion and is most often used to describe that event occurring in a race. It was, perhaps first, an ultra runner thing (Ann Trason chicked a multitude of dudes), then a triathlon thing (very few escape Chrissie Wellington) and now just a thing. If you’d like to read some insight into the world of being chicked (and also dude-ed), check out the article in Runners World describing the phenomenon. For even more details, see Run Zoe Run, an excellent running blog.
Back to my rage… Being chicked should irritate my manhood. It should cause a total revamping of my training, diet, heck – my entire lifestyle. After all dudes aren’t supposed to be passed by anyone other than dudes, right?
Maybe not. I looked closely at the How I Met Your Mother episode and saw Barney Stinson, the ultimate dude, chicked during the NYC Marathon. Dennis, the lead character in Run Fatboy Run, very much a “manly man” was chicked by every chick in the London Marathon. Look at every marathon, half marathon, 10K, Ironman and more; guys get chicked often.

I was first chicked in the early 80’s. Yep, I escaped my high school, collegiate and the first couple of years post-collegiate without ever having to accept the deflation of such a non-macho act as being chicked. The first time, however, more than made up for it. On my way to a 33 minute 10K, New Zealand Olympian Anne Audain flew by my like I was standing still. Somehow it was easier to accept because it was Anne and she was just FASTER THAN ME! 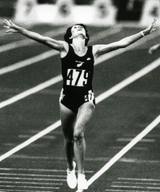 Today and many days since Anne blasted by, I have been chicked and chicked again. Sometimes by faster chicks, sometimes by fresher chicks, always by chicks who gave little or no regard to the ego annihilating act they had imposed on me. What about me? What about my needs? Worse yet, as I’ve gotten older, it happens more often.
Don’t get me wrong, I’ve dude-ed more than my share. I’ve left many a chick whimpering by the side of the road having had my running dude-liness imposed upon her. I feel no remorse for my action, so I suppose I should expect none in return.
Most of us don’t care. We’re runners – all of us. Some are faster, leaner, fitter, younger. We come in all shapes, sizes, speed levels and in two sexes. The fact is that most of us don’t do it for how we compare to others, we do it for ourselves. That’s part of the beauty of running.
I’d ramble some more but I need to do some Cherry Creek State Park reconnaissance. If I can find the right bush in the right place to hide behind, I’ll get her tomorrow. 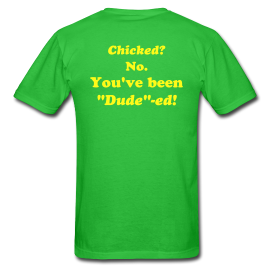 For your own “Chicked/Dude-ed T Shirt go to Zoe’s website.