Recap: Flying Pig Marathon May 2000 (Living in the Past) 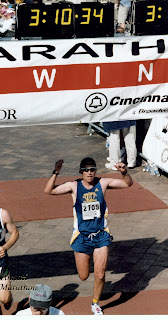 Reprinted from my real estate newsletter, The Finish Line: June 2000
Occasionally, I get e-mail from a running friend who has taken the time to send everyone they know a note describing in the most minute detail every facet of their latest race. While I approach these writings with the same caution I would utilize with ripe mule carcass, I almost always read them and send back some relevant comment like, “must have been fun,” or “sounds like you did well.”
Most recently I participated in the Cincinnati Flying Pig Marathon. Having what I would describe as a successful outing, I feel obligated to share it with all of you who choose to read on from this point.
My goal for this outing was threefold: 1) to run under 3 hours and 25 minutes and qualify for the Boston Marathon; 2) to spend time with my sons and see their track meets; and 3) spend time with my Mother on Mother’s Day weekend. Goals number 2 and 3 are easy and all always enjoyable experiences. Goal number 1 however has been elusive over the past eight years.
Since moving to the Boulder area, I have run nine marathons, finishing eight of them. The fastest was in Pueblo back in 1992, a 3:22:21 at a time when my Boston qualifying time was 3:20. In two of those marathons (Long Beach and Albuquerque) I was running extremely well only to meet with a rather untimely injury. Two (Denver and New York 1994) I would classify as easy mostly because I ran so slowly that it didn’t matter. I felt adequately prepared for half of them.
Last year I ran the Inaugural Flying Pig in 3:34:08. I had run 985 miles in the four months prior to the race and had tuned up with a disappointing 34:20 five mile at the Cherry Creek Sneak.
This year I had prepped with 1159 miles in the same four months and had run 31:55 at Cherry Creek on a less than ideal day. The biggest difference, however, was that last year I weighed over 200 pounds at the Pig (what do I mean AT the Pig? I WAS the Pig), this year I was a svelte 175. But, I digress.
Race day was sunny, moderately cool but breezy. My day started poorly with my watch alarm not activating and me awaking only an hour before race time (and I was fifteen minutes from downtown).
Through the patience of my Mom and sons and some fancy footwork I was at the start line with five minutes to spare. My plan was to run in the 7:30’s for the first 20 miles and then see what I had left for the final 10K. The plan appeared faulty as I cruised through the first mile (thinking I was around 7:30) at 6:53. YIKES! Too fast! Luckily, the second and third miles were all uphill and so with a 7:30 and a 7:50, I was back on track.
Then an odd thing happened; something that I wasn’t necessarily expecting but wasn’t surprising just the same. I began to run between 7:13 and 7:24 without any major discomfort. As my watch recorded each mile split I was constantly telling myself “I have to slow down. I’d better slow down.” I didn’t.
At 18 miles I began running with a 22-year-old named Nicholas, from Knoxville. He was whooping and having all kinds of fun so I figured he’d make a good diversion for a few miles. We passed the twenty mile mark in 2:27:09 after I’d run pretty even five mile splits of 36:49, 36:59, 36:47 and 36:34.
At twenty, three things happened: I passed my sons who were yelling and screaming “Go Dad!” I turned my hat around (indicating that I was now serious and reminding myself that I was almost done) and I started counting how many people I was passing.
After averaging 7:21.6 per mile, I had one of those rare marathon moments, I actually began going FASTER at the twenty mile mark.
My next three miles were 7:06, 6:50 and 6:49. By 23, I was confident that I would crash the sub 3:25 barrier and while my right hamstring was catching and very tight, I danced the injury tightrope through final miles of 7:03, 7:00 and 7:07. My final time was 3:10:33.4! I’d passed 59 people. I’d qualified for the Holy Grail of marathons: Boston. 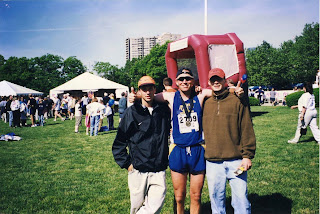 I’d run negative splits (the second half faster than the first) for the first time ever in a marathon: 1:36:44 for the first half, 1:33:49 for the second. I’d also run the last 10K in 43:23. My average was slightly over 7: 16 and except for the hamstring nursing, I had run comfortably most all of the way.
While I’m happy with the objective result of my run, I’m elated about how I was able to share it with my sons. They’ve made me proud of them since they were born and it was nice to do something that allowed them to be proud of me. It was SO COOL seeing them yelling for me during the final stretch to the finish line. I thank them AND my Mom for their love and support during a very hectic weekend of track meets and extra stresses.
Well, the man behind the camera is motioning that my acceptance speech for “Runner of the Week” is getting long. I best end this saga. Go ahead, say it: “Must have been fun. Sounds like you did well.” See you in Boston, April 16, 2001!