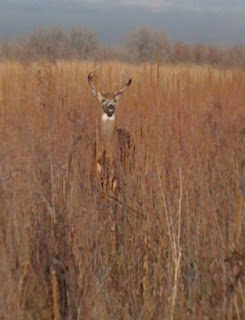 Went for a nice run the other day in the Cherry Creek State Park. While running a trail near the creek, I startled a doe coming around a bend. She gave me a look and ran into the high bushes. When I got to her space (even deer have space, you know) there was her boyfriend (pictured) giving me the evil eye roughly 30 feet away.
With him being a handsome creature, I went for my phone to capture the moment in a picture. He looked away (obviously in an effort to ruin my photographic moment). I took a far away lousy pic.
Then, a strange thing happened. I began chatting with him. “Hi buddy,” I said. “Are you finding enough food? How are you doin’?”
If you know me at all, you know that the strange thing had nothing to do with me talking to a deer. The strange thing was that he responded by slowly walking in my direction. First 20 feet away; then fifteen and finally about seven feet from my position on the trail.

Once I recognized the coolness of the moment, my next thought was the headline, “Runner Hoofed to Death” or “Surgeons Remove Antler From Runner’s Behind.” Perhaps he was having a similar thought process because just as I turned away to move on, he did the same.

I’ve always said that my favorite part of running is connecting to my planet. It’s also fun to connect with its inhabitants. Run on!