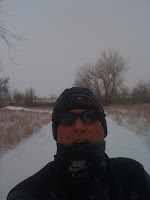 As I close the book on 2010,  I’m chomping at the bit for 2011. After two rough years, I finally am beginning to feel anchored again and believe that the worst is in my rear view mirror (I can’t speak for your mirror, sorry). A big part of the anchor is the run (and that doesn’t take away from the other important anchors in my life: my wife, Linda and my sons, Matt & Ryan).
Today’s run, the final of 2010, was in the Cherry Creek State Park. The plan was to go 6 or 7 miles according to how well I’d dressed (only 3 degrees above zero). About four inches of snow sat on the ground and very few footsteps preceded mine. I like it like that. I like being the powder buster on the trail, makes me feel like an intrepid-explorer type. That explorer mentality took me to the woods, the result of which was a lengthening of the run to 9 miles (that also means I dressed well).
Two things stood out today. First I noticed that the hills don’t look as hilly when they are layered with a blanket of snow. Might be some kind of optical illusion but I noticed it at each hill (not sure they were any easier to ascend). Second, was a more than strange awareness of the squeaky noise my shoes make as each step peels off the snowpack. 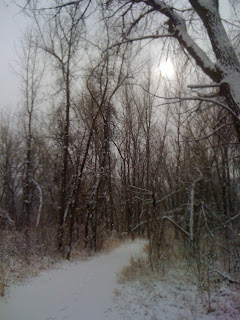 It’s nice on a snowy day to get away from the masses of inexperienced, unfocused, frazzled Colorado snow drivers. It seems as though most of the people that have migrated to Colorado didn’t come expecting snow and they drive accordingly. They make me nervous. In the park, however, most of the run was absolutely soundless. There was a peacefulness to the woods in particular today as I pondered both the run and the year ahead.
This run seemed indicative of the year: me attempting to escape the mess and finding solitude, focus and inspiration on the trail. George Sheehan wrote, “The more I run, the more I want to run, and the more I live a life conditioned and influenced and fashioned by my running. And the more I run, the more certain I am that I am heading for my real goal: to become the person I am.” 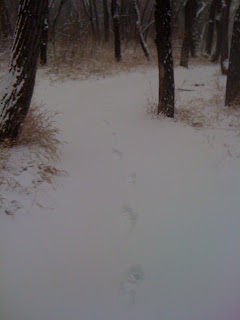 2031 miles for the year. Lots of time to reflect, think and plan. 2011 is nearly here and I have no problem turning the calendrical (nice word, if it actually was  one) page, because I think I’m finally ready to head back into the mess.