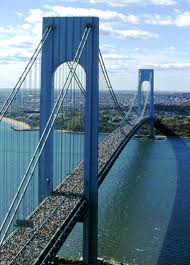 I’ve run 15 marathons in my day and ran New York in 1993, 94 and 98. I have to admit, it’s an incredible experience AND a logistical masterpiece. How Mary Wittenberg and her team can orchestrate such an event is beyond what I can imagine, even on my most imaginative day.

My recollection is that every part of the course has its own special feelings. The Bridge was awesome (and it’s true, you can actually feel it shaking from the people running on it), Brooklyn an amazing cross section of this country of ours, Queens was where the marathon begins to make itself noticed, First Avenue is absolutely WILD, Harlem and the Bronx were very cool and Central Park is the perfect ending to the course.

I have several great NYC memories. My first year (1993) I was loosening up in Central Park the day before the race. Bill Rodgers ran by. I said HI, he said HI and we started yacking. We ran and yacked quite a ways (I’m guessing a few miles at least). Unfortunately Boston Billy ran and yacked much faster than I should have the day before the marathon – oh well. In 1994 I started the race very close to a HUGE Canadian flag. I have a picture of me and that flag on the Bridge somewhere in a box in the basement. Better than that though, the next year that shot of the runners starting the race and that big flag were captured on a Seinfeld episode (that means I was on Seinfeld, right?).

I also met my friend Cathy Troisi at New York, used the race to bring my Mom to the Big Apple for the first time, and generally had a great time every time I ran there.

Today the NY Road Runners opened registration for the 2011 race (on my birthday) and created the opportunity for a few people to actually be chosen today. I’m hoping for the best.